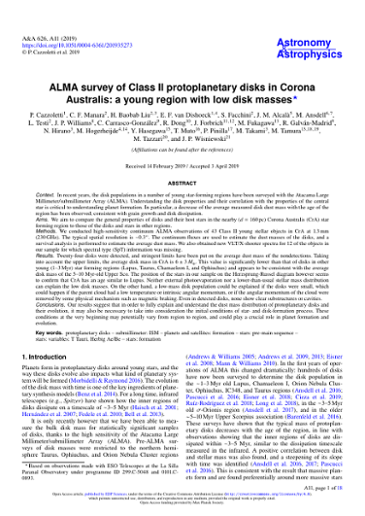 Context. In recent years, the disk populations in a number of young star-forming regions have been surveyed with the Atacama Large Millimeter/submillimeter Array (ALMA). Understanding the disk properties and their correlation with the properties of the central star is critical to understanding planet formation. In particular, a decrease of the average measured disk dust mass with the age of the region has been observed, consistent with grain growth and disk dissipation. Aims. We aim to compare the general properties of disks and their host stars in the nearby (d = 160 pc) Corona Australis (CrA) star forming region to those of the disks and stars in other regions. Methods. We conducted high-sensitivity continuum ALMA observations of 43 Class II young stellar objects in CrA at 1.3 mm (230 GHz). The typical spatial resolution is similar to 0.3 ''. The continuum fluxes are used to estimate the dust masses of the disks, and a survival analysis is performed to estimate the average dust mass. We also obtained new VLT/X-shooter spectra for 12 of the objects in our sample for which spectral type (SpT) information was missing. Results. Twenty-four disks were detected, and stringent limits have been put on the average dust mass of the nondetections. Taking into account the upper limits, the average disk mass in CrA is 6 +/- 3 M-circle plus. This value is significantly lower than that of disks in other young (1-3 Myr) star forming regions (Lupus, Taurus, Chamaeleon I, and Ophiuchus) and appears to be consistent with the average disk mass of the 5-10 Myr-old Upper Sco. The position of the stars in our sample on the Herzsprung-Russel diagram however seems to confirm that CrA has an age similar to Lupus. Neither external photoevaporation nor a lower-than-usual stellar mass distribution can explain the low disk masses. On the other hand, a low-mass disk population could be explained if the disks were small, which could happen if the parent cloud had a low temperature or intrinsic angular momentum, or if the angular momentum of the cloud were removed by some physical mechanism such as magnetic braking. Even in detected disks, none show clear substructures or cavities. Conclusions. Our results suggest that in order to fully explain and understand the dust mass distribution of protoplanetary disks and their evolution, it may also be necessary to take into consideration the initial conditions of star- and disk-formation process. These conditions at the very beginning may potentially vary from region to region, and could play a crucial role in planet formation and evolution.