Can intrinsic alignments of elongated low-mass galaxies be used to map the cosmic web at high redshift? 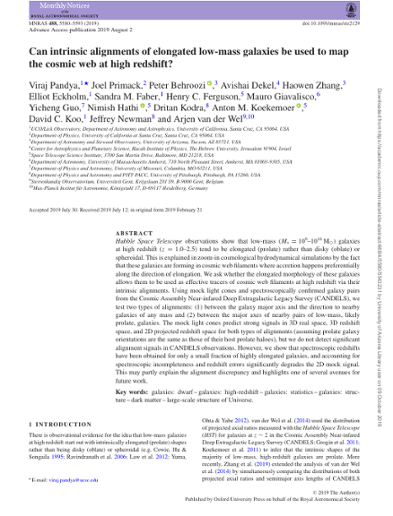 Copyright © 2019 The Author(s) Published by Oxford University Press on behalf of the Royal Astronomical Society.

Hubble Space Telescope observations show that low-mass () galaxies at high redshift (z= 1.0-2.5) tend to be elongated (prolate) rather than disky (oblate) or spheroidal. This is explained in zoom-in cosmological hydrodynamical simulations by the fact that these galaxies are forming in cosmic web filaments where accretion happens preferentially along the direction of elongation. We ask whether the elongated morphology of these galaxies allows them to be used as effective tracers of cosmic web filaments at high redshift via their intrinsic alignments. Using mock light cones and spectroscopically confirmed galaxy pairs from the Cosmic Assembly Near-infared Deep Extragalactic Legacy Survey (CANDELS), we test two types of alignments: (1) between the galaxy major axis and the direction to nearby galaxies of any mass and (2) between the major axes of nearby pairs of low-mass, likely prolate, galaxies. The mock light cones predict strong signals in 3D real space, 3D redshift space, and 2D projected redshift space for both types of alignments (assuming prolate galaxy orientations are the same as those of their host prolate haloes), but we do not detect significant alignment signals in CANDELS observations. However, we show that spectroscopic redshifts have been obtained for only a small fraction of highly elongated galaxies, and accounting for spectroscopic incompleteness and redshift errors significantly degrades the 2D mock signal. This may partly explain the alignment discrepancy and highlights one of several avenues for future work.