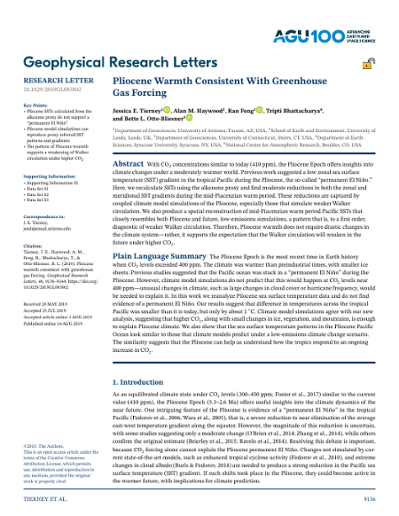 ©2019. The Authors. This is an open access article under the terms of the Creative Commons Attribution License, which permits use, distribution and reproduction in any medium, provided the original work is properly cited.

With CO2 concentrations similar to today (410 ppm), the Pliocene Epoch offers insights into climate changes under a moderately warmer world. Previous work suggested a low zonal sea surface temperature (SST) gradient in the tropical Pacific during the Pliocene, the so-called "permanent El Nino." Here, we recalculate SSTs using the alkenone proxy and find moderate reductions in both the zonal and meridional SST gradients during the mid-Piacenzian warm period. These reductions are captured by coupled climate model simulations of the Pliocene, especially those that simulate weaker Walker circulation. We also produce a spatial reconstruction of mid-Piacenzian warm period Pacific SSTs that closely resembles both Pliocene and future, low-emissions simulations, a pattern that is, to a first order, diagnostic of weaker Walker circulation. Therefore, Pliocene warmth does not require drastic changes in the climate system-rather, it supports the expectation that the Walker circulation will weaken in the future under higher CO2. Plain Language Summary The Pliocene Epoch is the most recent time in Earth history when CO2 levels exceeded 400 ppm. The climate was warmer than preindustrial times, with smaller ice sheets. Previous studies suggested that the Pacific ocean was stuck in a "permanent El Nino" during the Pliocene. However, climate model simulations do not predict that this would happen at CO2 levels near 400 ppm-unusual changes in climate, such as large changes in cloud cover or hurricane frequency, would be needed to explain it. In this work we reanalyze Pliocene sea surface temperature data and do not find evidence of a permanent El Nina Our results suggest that difference in temperatures across the tropical Pacific was smaller than it is today, but only by about 1 degrees C. Climate model simulations agree with our new analysis, suggesting that higher CO2, along with small changes in ice, vegetation, and mountains, is enough to explain Pliocene climate. We also show that the sea surface temperature patterns in the Pliocene Pacific Ocean look similar to those that climate models predict under a low-emissions climate change scenario. The similarity suggests that the Pliocene can help us understand how the tropics respond to an ongoing increase in CO2.