New Intrusion Analyses on the CVLT-3: Utility in Distinguishing the Memory Disorders of Alzheimer's Huntington's Disease 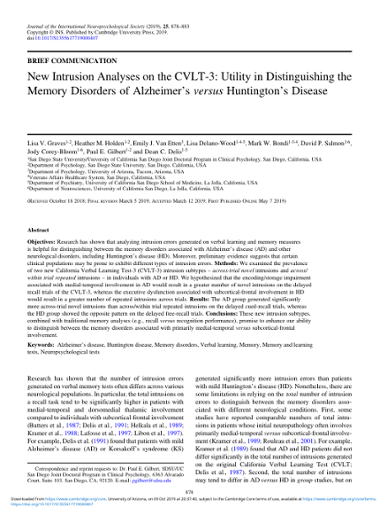 JOURNAL OF THE INTERNATIONAL NEUROPSYCHOLOGICAL SOCIETY

Objectives: Research has shown that analyzing intrusion errors generated on verbal learning and memory measures is helpful for distinguishing between the memory disorders associated with Alzheimer's disease (AD) and other neurological disorders, including Huntington's disease (HD). Moreover, preliminary evidence suggests that certain clinical populations may be prone to exhibit different types of intrusion errors. Methods: We examined the prevalence of two new California Verbal Learning Test-3 (CVLT-3) intrusion subtypes - across-trial novel intrusions and across/within trial repeated intrusions - in individuals with AD or HD. We hypothesized that the encoding/storage impairment associated with medial-temporal involvement in AD would result in a greater number of novel intrusions on the delayed recall trials of the CVLT-3, whereas the executive dysfunction associated with subcortical-frontal involvement in HD would result in a greater number of repeated intrusions across trials. Results: The AD group generated significantly more across-trial novel intrusions than across/within trial repeated intrusions on the delayed cued-recall trials, whereas the HD group showed the opposite pattern on the delayed free-recall trials. Conclusions: These new intrusion subtypes, combined with traditional memory analyses (e.g., recall versus recognition performance), promise to enhance our ability to distinguish between the memory disorders associated with primarily medial-temporal versus subcortical-frontal involvement.