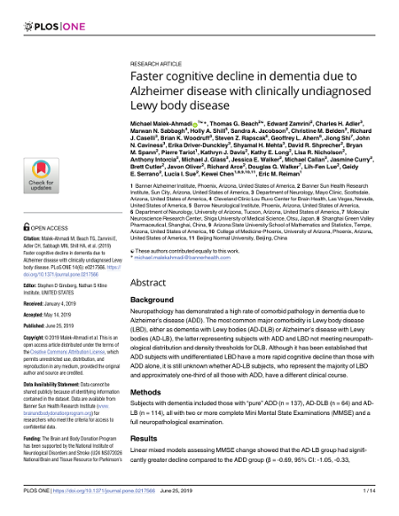 Copyright © 2019 Malek-Ahmadi et al. This is an open access article distributed under the terms of the Creative Commons Attribution License.

Background Neuropathology has demonstrated a high rate of comorbid pathology in dementia due to Alzheimer's disease (ADD). The most common major comorbidity is Lewy body disease (LBD), either as dementia with Lewy bodies (AD-DLB) or Alzheimer's disease with Lewy bodies (AD-LB), the latter representing subjects with ADD and LBD not meeting neuropathological distribution and density thresholds for DLB. Although it has been established that ADD subjects with undifferentiated LBD have a more rapid cognitive decline than those with ADD alone, it is still unknown whether AD-LB subjects, who represent the majority of LBD and approximately one-third of all those with ADD, have a different clinical course. Methods Subjects with dementia included those with "pure" ADD (n = 137), AD-DLB (n = 64) and ADLB (n = 114), all with two or more complete Mini Mental State Examinations (MMSE) and a full neuropathological examination. Results Linear mixed models assessing MMSE change showed that the AD-LB group had significantly greater decline compared to the ADD group (beta = -0.69, 95% CI: -1.05, -0.33, p<0.001) while the AD-DLB group did not (beta = -0.30, 95% CI: -0.73, 0.14, p = 0.18). Of those with AD-DLB and AD-LB, only 66% and 2.1%, respectively, had been diagnosed with LBD at any point during their clinical course. Compared with clinically-diagnosed AD-DLB subjects, those that were clinically undetected had significantly lower prevalences of parkinsonism (p = 0.046), visual hallucinations (p = 0.0008) and dream enactment behavior (0.013). Conclusions The probable cause of LBD clinical detection failure is the lack of a sufficient set of characteristic core clinical features. Core DLB clinical features were not more common in AD-LB as compared to ADD. Clinical identification of ADD with LBD would allow stratified analyses of ADD clinical trials, potentially improving the probability of trial success.

Except where otherwise noted, this item's license is described as Copyright © 2019 Malek-Ahmadi et al. This is an open access article distributed under the terms of the Creative Commons Attribution License.