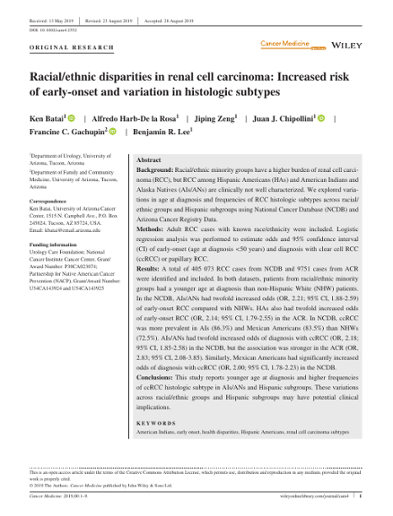 Copyright © 2019 The Authors. Cancer Medicine published by John Wiley & Sons Ltd. This is an open access article under the terms of the Creative Commons Attribution License.

Background Racial/ethnic minority groups have a higher burden of renal cell carcinoma (RCC), but RCC among Hispanic Americans (HAs) and American Indians and Alaska Natives (AIs/ANs) are clinically not well characterized. We explored variations in age at diagnosis and frequencies of RCC histologic subtypes across racial/ethnic groups and Hispanic subgroups using National Cancer Database (NCDB) and Arizona Cancer Registry Data. Methods Adult RCC cases with known race/ethnicity were included. Logistic regression analysis was performed to estimate odds and 95% confidence interval (CI) of early-onset (age at diagnosis <50 years) and diagnosis with clear cell RCC (ccRCC) or papillary RCC. Results A total of 405 073 RCC cases from NCDB and 9751 cases from ACR were identified and included. In both datasets, patients from racial/ethnic minority groups had a younger age at diagnosis than non-Hispanic White (NHW) patients. In the NCDB, AIs/ANs had twofold increased odds (OR, 2.21; 95% CI, 1.88-2.59) of early-onset RCC compared with NHWs. HAs also had twofold increased odds of early-onset RCC (OR, 2.14; 95% CI, 1.79-2.55) in the ACR. In NCDB, ccRCC was more prevalent in AIs (86.3%) and Mexican Americans (83.5%) than NHWs (72.5%). AIs/ANs had twofold increased odds of diagnosis with ccRCC (OR, 2.18; 95% CI, 1.85-2.58) in the NCDB, but the association was stronger in the ACR (OR, 2.83; 95% CI, 2.08-3.85). Similarly, Mexican Americans had significantly increased odds of diagnosis with ccRCC (OR, 2.00; 95% CI, 1.78-2.23) in the NCDB. Conclusions This study reports younger age at diagnosis and higher frequencies of ccRCC histologic subtype in AIs/ANs and Hispanic subgroups. These variations across racial/ethnic groups and Hispanic subgroups may have potential clinical implications.

Except where otherwise noted, this item's license is described as Copyright © 2019 The Authors. Cancer Medicine published by John Wiley & Sons Ltd. This is an open access article under the terms of the Creative Commons Attribution License.