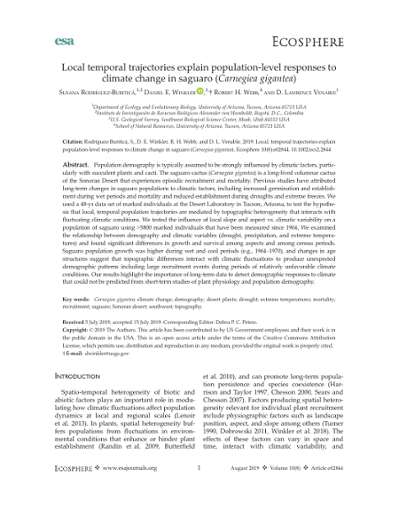 Copyright © 2019 The Authors. This article has been contributed to by US Government employees and their work is in the public domain in the USA. This is an open access article under the terms of the Creative Commons Attribution License, which permits use, distribution and reproduction in any medium, provided the original work is properly cited.

Population demography is typically assumed to be strongly influenced by climatic factors, particularly with succulent plants and cacti. The saguaro cactus (Carnegiea gigantea) is a long-lived columnar cactus of the Sonoran Desert that experiences episodic recruitment and mortality. Previous studies have attributed long-term changes in saguaro populations to climatic factors, including increased germination and establishment during wet periods and mortality and reduced establishment during droughts and extreme freezes. We used a 48-yr data set of marked individuals at the Desert Laboratory in Tucson, Arizona, to test the hypothesis that local, temporal population trajectories are mediated by topographic heterogeneity that interacts with fluctuating climatic conditions. We tested the influence of local slope and aspect vs. climatic variability on a population of saguaro using >5800 marked individuals that have been measured since 1964. We examined the relationship between demography and climatic variables (drought, precipitation, and extreme temperatures) and found significant differences in growth and survival among aspects and among census periods. Saguaro population growth was higher during wet and cool periods (e.g., 1964-1970), and changes in age structures suggest that topographic differences interact with climatic fluctuations to produce unexpected demographic patterns including large recruitment events during periods of relatively unfavorable climate conditions. Our results highlight the importance of long-term data to detect demographic responses to climate that could not be predicted from short-term studies of plant physiology and population demography.