A Migration Model for the Polar Spiral Troughs of Mars 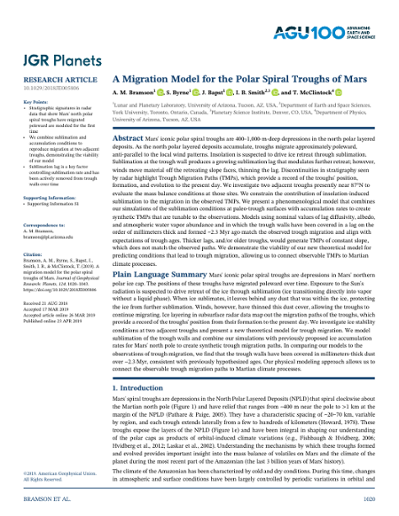 Mars' iconic polar spiral troughs are 400-1,000-m-deep depressions in the north polarlayered deposits. As the north polarlayered deposits accumulate, troughs migrate approximately poleward, anti-parallel to the local wind patterns. Insolation is suspected to drive ice retreat through sublimation. Sublimation at the trough wall produces a growing sublimation lag that modulates further retreat; however, winds move material off the retreating slope faces, thinning the lag. Discontinuities in stratigraphy seen by radar highlight Trough Migration Paths (TMPs), which provide a record of the troughs' position, formation, and evolution to the present day. We investigate two adjacent troughs presently near 87 degrees N to evaluate the mass balance conditions at those sites. We constrain the contribution of insolation-induced sublimation to the migration in the observed TMPs. We present a phenomenological model that combines our simulations of the sublimation conditions at paleo-trough surfaces with accumulation rates to create synthetic TMPs that are tunable to the observations. Models using nominal values of lag diffusivity, albedo, and atmospheric water vapor abundance and in which the trough walls have been covered in a lag on the order of millimeters thick and formed 2.3Myr ago match the observed trough migration and align with expectations of trough ages. Thicker lags, and/or older troughs, would generate TMPs of constant slope, which does not match the observed paths. We demonstrate the viability of our new theoretical model for predicting conditions that lead to trough migration, allowing us to connect observable TMPs to Martian climate processes. Plain Language Summary Mars' iconic polar spiral troughs are depressions in Mars' northern polar ice cap. The positions of these troughs have migrated poleward over time. Exposure to the Sun's radiation is suspected to drive retreat of the ice through sublimation (ice transitioning directly into vapor without a liquid phase). When ice sublimates, it leaves behind any dust that was within the ice, protecting the ice from further sublimation. Winds, however, have thinned this dust cover, allowing the troughs to continue migrating. Ice layering in subsurface radar data map out the migration paths of the troughs, which provide a record of the troughs' position from their formation to the present day. We investigate ice stability conditions at two adjacent troughs and present a new theoretical model for trough migration. We model sublimation of the trough walls and combine our simulations with previously proposed ice accumulation rates for Mars' north pole to create synthetic trough migration paths. In comparing our models to the observations of trough migration, we find that the trough walls have been covered in millimeters-thick dust over 2.3Myr, consistent with previously hypothesized ages. Our physical modeling approach allows us to connect the observable trough migration paths to Martian climate processes.