Seasonal Variability of Deuterium in the Upper Atmosphere of Mars 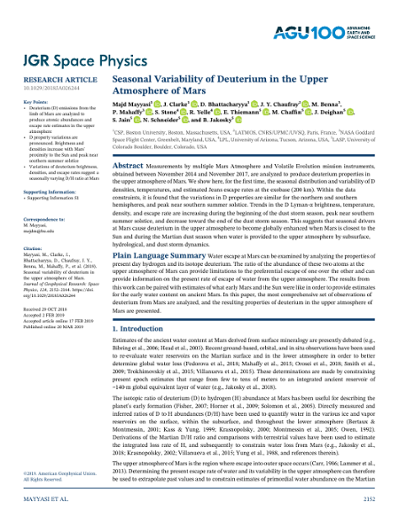 Measurements by multiple Mars Atmosphere and Volatile Evolution mission instruments, obtained between November 2014 and November 2017, are analyzed to produce deuterium properties in the upper atmosphere of Mars. We show here, for the first time, the seasonal distribution and variability of D densities, temperatures, and estimated Jeans escape rates at the exobase (200 km). Within the data constraints, it is found that the variations in D properties are similar for the northern and southern hemispheres, and peak near southern summer solstice. Trends in the D Lyman-alpha brightness, temperature, density, and escape rate are increasing during the beginning of the dust storm season, peak near southern summer solstice, and decrease toward the end of the dust storm season. This suggests that seasonal drivers at Mars cause deuterium in the upper atmosphere to become globally enhanced when Mars is closest to the Sun and during the Martian dust season when water is provided to the upper atmosphere by subsurface, hydrological, and dust storm dynamics. Plain Language Summary Water escape at Mars can be examined by analyzing the properties of present day hydrogen and its isotope deuterium. The ratio of the abundance of these two atoms at the upper atmosphere of Mars can provide limitations to the preferential escape of one over the other and can provide information on the present rate of escape of water from the upper atmosphere. The results from this work can be paired with estimates of what early Mars and the Sun were like in order to provide estimates for the early water content on ancient Mars. In this paper, the most comprehensive set of observations of deuterium from Mars are analyzed, and the resulting properties of deuterium in the upper atmosphere of Mars are presented.