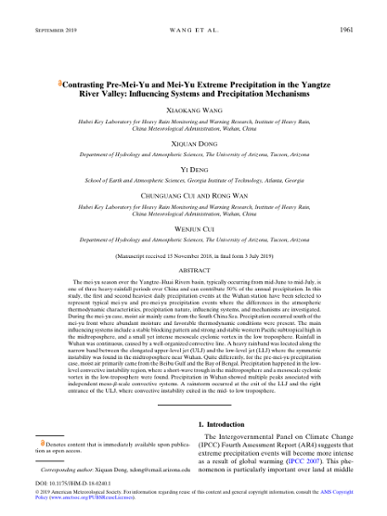 The mei-yu season over the Yangtze-Huai Rivers basin, typically occurring from mid-June to mid-July, is one of three heavy-rainfall periods over China and can contribute 50% of the annual precipitation. In this study, the first and second heaviest daily precipitation events at the Wuhan station have been selected to represent typical mei-yu and pre-mei-yu precipitation events where the differences in the atmospheric thermodynamic characteristics, precipitation nature, influencing systems, and mechanisms are investigated. During the mei-yu case, moist air mainly came from the South China Sea. Precipitation occurred south of the mei-yu front where abundant moisture and favorable thermodynamic conditions were present. The main influencing systems include a stable blocking pattern and strong and stable western Pacific subtropical high in the midtroposphere, and a small yet intense mesoscale cyclonic vortex in the low troposphere. Rainfall in Wuhan was continuous, caused by a well-organized convective line. A heavy rainband was located along the narrow band between the elongated upper-level jet (ULJ) and the low-level jet (LLJ) where the symmetric instability was found in the midtroposphere near Wuhan. Quite differently, for the pre-mei-yu precipitation case, moist air primarily came from the Beibu Gulf and the Bay of Bengal. Precipitation happened in the low-level convective instability region, where a short-wave trough in the midtroposphere and a mesoscale cyclonic vortex in the low-troposphere were found. Precipitation in Wuhan showed multiple peaks associated with independent meso-beta-scale convective systems. A rainstorm occurred at the exit of the LLJ and the right entrance of the ULJ, where convective instability exited in the mid- to low troposphere.