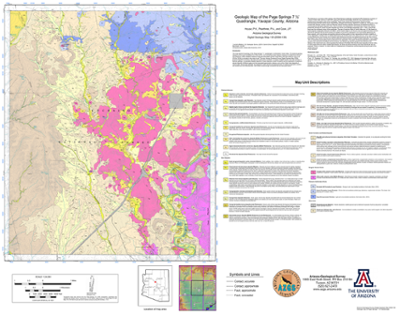 This map depicts the geology of the Page Springs 7 ½‘ quadrangle in northwestern Verde Valley. The bedrock geology depicted on the map is simplified from Holm (2015), and surficial and basin deposit mapping is modified from House and Pearthree (1993). Detailed mapping of deposits associated with the Verde River and Oak Creek by Cook et al. (2010a; 2010b) is included in the map as well. This new Arizona Geological Survey Digital Geologic Map (DGM) product integrates all of these data sets and makes them available in a variety of digital formats. The map consists of bedrock geology, a moderately detailed depiction of basin deposits (Verde Formation) and the distribution of piedmont alluvial deposits of different ages and their associated geomorphic surfaces, and a strip of Oak Creek deposits of various ages. Rough age estimates are assigned to each alluvial unit based primarily on relative topographic position and surface and soil characteristics, with limited numerical age constraints that are discussed below. The following is a summary of the geology of the Page Springs quadrangle, including the Plio-Quaternary evolution of northern Verde Valley derived in part from mapping in adjacent quadrangles. Bedrock units predominate in the northernmost and eastern parts of the quadrangle. These rocks consist of Pennsylvanian Supai Formation, Pennsylvanian-Permian Hermit Shale, and Permian Schnebly Hill Formation. Bedrock is overlain by, and locally in fault contact with, Miocene volcanic rocks and Pliocene Verde Formation deposits. Exposures of limestone and fine- to coarse-grained siliciclastic deposits of the Verde Formation are widespread in the quadrangle. Some of the highest preserved remnants of Verde Formation deposits are found in the Clarkdale quadrangle, up to ~1340 m above sea level near the northwest corner of the quadrangle. The age of maximum filling of Verde Valley was ~2.5 Ma based on paleomagnetic stratigraphy (Bressler and Butler, 1978); eroded ridges in the Jerome area are capped with thin remnant alluvial fan deposits that are poorly-preserved vestiges of this period. Subsequent river downcutting apparently has been episodic, with river terraces and piedmont alluvial surfaces graded to them representing intervals of stability or minor aggradation. Multiple early to middle Pleistocene river terraces exist in the valley axis (e.g., Qo1r, Qi1r); we map 3 early Pleistocene river terraces and 3 middle to late Pleistocene terraces; the highest terraces are 90-100 m above the modern river channel, and thus are inset far below the maximum level of Verde Formation deposition. Thus roughly 70% of Verde River downcutting had occurred prior to Qo deposition. The extent of Holocene deposits is quite limited except in the Verde River floodplain and low terraces, and tributary alluvial fans graded to the Holocene river. Splays of the Verde fault zone, which separates the bedrock of the Black Hills from the basin deposits of Verde Valley, In some areas there are clearly multiple fault strands, and there are almost certainly more fault strands that are not exposed. There is, however, no clear evidence of displacement of Quaternary surficial deposits along this part of the Verde fault zone. Flood hazards?