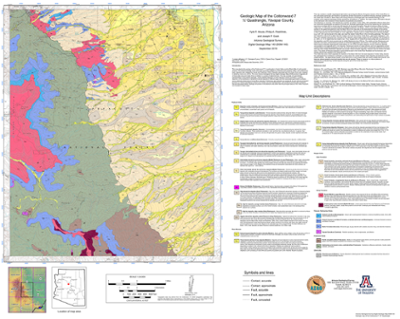 This map depicts the geology of the Cottonwood 7 ½‘ quadrangle in Verde Valley and the Black Hills of north-central Arizona. This bedrock geology of this area was previously mapped by Anderson and Creasey (1967), and surficial and basin deposits were mapped by House and Pearthree (1993). Deposits associated with the Verde River were mapped in detail by Cook et al. (2010). This new Arizona Geological Survey Digital Geologic Map (DGM) product integrates all of these data sets and makes them available in a variety of digital formats. The map consists of a generalized representation of the bedrock geology, a fairly detailed depiction of basin deposits (Verde Formation), a careful depiction of the distribution of piedmont alluvial deposits of different ages and their associated geomorphic surfaces, and a relatively limited strip of Verde River deposits. Preliminary age estimates are assigned to each alluvial unit based primarily on relative topographic position and surface and soil characteristics, with limited numerical age constraints that are discussed below. Geologic structures in the bedrock units other than the principal traces of the Verde Fault are not included in these maps. This map contains a wealth of geological information concerning the effects of long-term incision of the Verde River on the surrounding landscape and impacts of Quaternary climatic fluctuations on piedmont tributary drainage systems and the Verde River. Evident in these maps is the strong influence of drainage basin and substrate lithology on the evolution of the regional landscape and the persistence of landforms. In addition, the maps contain information relevant to the distribution and character of flood hazards and potential soil problems. The following is a summary of the Quaternary evolution of northern Verde Valley, with substantial evidence drawn from the Cottonwood quadrangle and adjacent Cornville and Clarkdale quadrangles. During the Quaternary the Verde River has downcut at least 300 m into the basin fill deposits of the Verde Formation. The age of maximum filling of Verde Valley was ~2.5 Ma based on paleomagnetic stratigraphy (Bressler and Butler, 1978); a very high remnant alluvial fan surface in the uppermost piedmont near the Black Hills in this map area is the best-preserved vestige of this period. Subsequent river downcutting apparently has been episodic, with river terraces and piedmont alluvial surfaces graded to them representing intervals of stability or minor aggradation. Multiple early to middle Pleistocene alluvial packages (e.g., Qo1, Qi1) can be traced to the valley axis near the modern Verde River in the Cornville quadrangle. The base of Qo1 deposits is about 50 m higher than the modern river near the modern Verde River – Oak Creek confluence. Less than 2 km upstream along the river, the base of Qi1 deposits, which locally contain the 767 ka Bishop Tuff (Crowley et al., 2007), is ~10 m higher than the modern river. Thus, roughly 80% of Verde River downcutting had occurred prior to Qo deposition, and 95% had occurred prior to middle Pleistocene time (780 ka). The middle and late Pleistocene and Holocene have been characterized by periods of substantial aggradation and incision. For example, Qi1 deposition filled several moderately deep tributary paleovalleys cut into Verde Formation deposits, and Qi1 piedmont deposits were graded to and aggrading Qi1r river deposits. Subsequent periods of major tributary and river aggradation almost certainly filled in erosional topography as well. All of this activity has occurred within a landscape framework formed by early and early middle Pleistocene deposits and eroded Verde Formation deposits, however, and net incision has been minor. The extent of Holocene deposits is quite limited except in the Verde River floodplain and low terraces, and tributary alluvial fans graded to the Holocene river. The Verde fault zone, which separates the bedrock of the Black Hills from the basin deposits of Verde Valley, bisects the quadrangle from southeast to northwest. In many areas, the contact between basin deposits and bedrock is quite sharply defined – the approximate location of the fault zone. In some areas there are clearly multiple fault strands, and there are almost certainly more fault strands that are not exposed. There is, however, no clear evidence of displacement of Quaternary surficial deposits along this part of the Verde fault zone. Flood hazards?