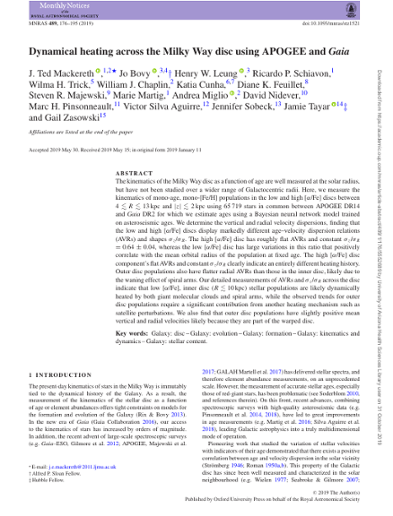 Copyright © 2019 The Author(s). Published by Oxford University Press on behalf of the Royal Astronomical Society.

The kinematics of the MilkyWay disc as a function of age arewellmeasured at the solar radius, but have not been studied over a wider range of Galactocentric radii. Here, we measure the kinematics of mono-age, mono-[Fe/H] populations in the low and high [alpha/Fe] discs between 4 less than or similar to R less than or similar to 13 kpc and vertical bar z vertical bar less than or similar to 2 kpc using 65 719 stars in common between APOGEE DR14 and Gaia DR2 for which we estimate ages using a Bayesian neural network model trained on asteroseismic ages. We determine the vertical and radial velocity dispersions, finding that the low and high [alpha/Fe] discs display markedly different age-velocity dispersion relations (AVRs) and shapes sigma(z)/sigma(R). The high [alpha/Fe] disc has roughly flat AVRs and constant sigma(z)/sigma(R) = 0.64 +/- 0.04, whereas the low [alpha/Fe] disc has large variations in this ratio that positively correlate with the mean orbital radius of the population at fixed age. The high [alpha/Fe] disc component's flat AVRs and constant sigma(z)/sigma(R) clearly indicate an entirely different heating history. Outer disc populations also have flatter radial AVRs than those in the inner disc, likely due to thewaning effect of spiral arms. Our detailedmeasurements ofAVRs and sigma(z)/sigma(R) across the disc indicate that low [alpha/Fe], inner disc (R less than or similar to 10 kpc) stellar populations are likely dynamically heated by both giant molecular clouds and spiral arms, while the observed trends for outer disc populations require a significant contribution from another heating mechanism such as satellite perturbations. We also find that outer disc populations have slightly positive mean vertical and radial velocities likely because they are part of the warped disc.