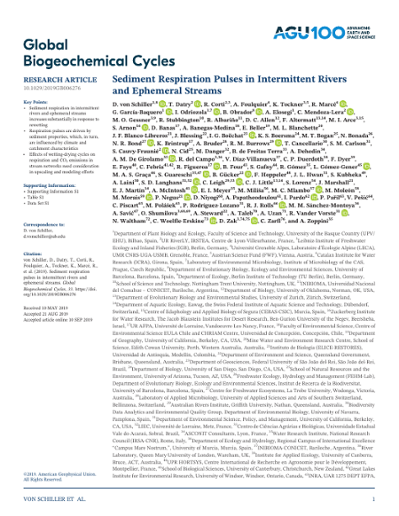 Intermittent rivers and ephemeral streams (IRES) may represent over half the global stream network, but their contribution to respiration and carbon dioxide (CO2) emissions is largely undetermined. In particular, little is known about the variability and drivers of respiration in IRES sediments upon rewetting, which could result in large pulses of CO2. We present a global study examining sediments from 200 dry IRES reaches spanning multiple biomes. Results from standardized assays show that mean respiration increased 32-fold to 66-fold upon sediment rewetting. Structural equation modeling indicates that this response was driven by sediment texture and organic matter quantity and quality, which, in turn, were influenced by climate, land use, and riparian plant cover. Our estimates suggest that respiration pulses resulting from rewetting of IRES sediments could contribute significantly to annual CO2 emissions from the global stream network, with a single respiration pulse potentially increasing emission by 0.2-0.7%. As the spatial and temporal extent of IRES increases globally, our results highlight the importance of recognizing the influence of wetting-drying cycles on respiration and CO2 emissions in stream networks.