A Call for Remediation: Food Deserts 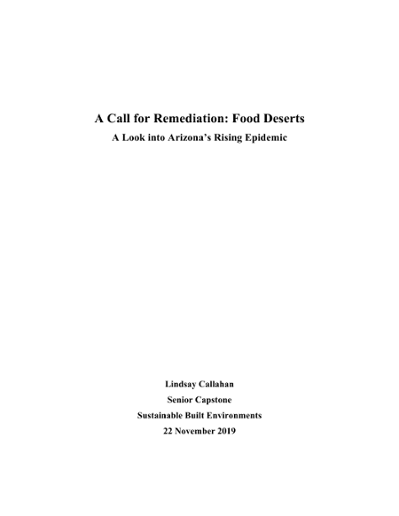 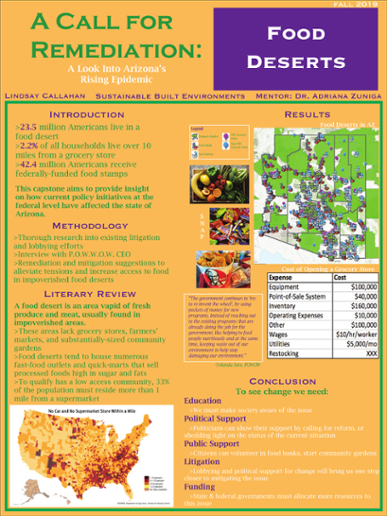 Copyright © is held by the author. Digital access to this material is made possible by the College of Architecture, Planning and Landscape Architecture, and the University Libraries, University of Arizona. Further transmission, reproduction or presentation (such as public display or performance) of protected items is prohibited except with permission of the author.

This item is part of the Sustainable Built Environments collection. For more information, contact http://sbe.arizona.edu.

The total area covered by cities is projected to triple worldwide in the next forty years (Swilling, 2016). Not only will this urban sprawl continue to consume America’s farmland, but sustainability efforts are largely being hampered, as resources will continue to be depleted, biodiversity will continue to shrink, and ecosystems will be degraded more so than they already are. In recent decades, there has been a flip in where people prefer to reside. Post World War II, America’s upper class preferred living in large mansions in the suburbs, while poorer people lived in or on the edge of central business districts. Nowadays, due to changing demographics and high fuel prices, affluent people prefer to reside in or near cities, and the suburbs have seen an increase in crime and poverty rates (Gallagher, 2014). In layman’s terms, the rich want to be near their jobs, recreation, and amenities, while the poor population has been pushed to less well-rounded/safe areas for residency. The United States’ national population is comprised of almost 326 million people, 23.5 million of whom currently live in a food desert (USDA, 2009). A whopping 2.2% of all American households are located more than ten miles away from a grocery store- this statistic is under-reported, as small corner stores are counted in the same category as big supermarkets in our Industry Classification System (North American Industrial Classification Systems, 2007 ) (Appendix A). Urban growth patterns show that expansion of the suburbs post World War II did not cause increased food access. Expansion radiated outwards, and food access largely remained centralized. Thus, those living on the outskirts where once the rich with means of transportation that would allow them to access food sources easily. However, since the switch in residents, the poor have much more difficulty accessing these supermarkets due to a variety of limitations. These low-income people who find it hard to get and access fresh produce and meat, live in what are called “food deserts.” A food desert does not say residents have no access to food at all, but the options available include numerous quick marts and/or fast food chains that provide a “wealth of processed, sugar, and fat-laden foods” (American Nutrition Association, 2010). Due to transportation barriers, research has demonstrated that people residing in food deserts tend to indulge in unhealthy options more than those living in supermarket accessible areas, and thus residents near or in food deserts tend to have health and weight issues. There is a positive correlation between food deserts increasing in quantity across America and America’s increasing obesity epidemic, where these health concerns end up having a snowball effect for the poor. This capstone is a policy review and lays out ideas to begin to alleviate the food desert crisis in America. The current and historical status of the situation will be thoroughly reviewed, and remediation suggestions will be flushed out throughout the paper.