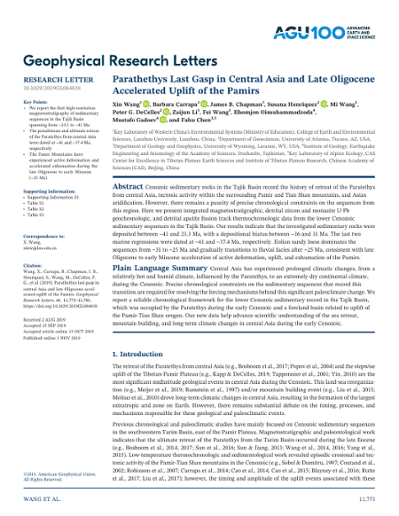 Cenozoic sedimentary rocks in the Tajik Basin record the history of retreat of the Paratethys from central Asia, tectonic activity within the surrounding Pamir and Tian Shan mountains, and Asian aridification. However, there remains a paucity of precise chronological constraints on the sequences from this region. Here we present integrated magnetostratigraphic, detrital zircon and monazite U-Pb geochronologic, and detrital apatite fission track thermochronologic data from the lower Cenozoic sedimentary sequences in the Tajik Basin. Our results indicate that the investigated sedimentary rocks were deposited between similar to 41 and 23.3 Ma, with a depositional hiatus between similar to 36 and 31 Ma. The last two marine regressions were dated at similar to 41 and similar to 37.4 Ma, respectively. Eolian sandy loess dominates the sequences from similar to 31 to similar to 25 Ma and gradually transitions to fluvial facies after similar to 25 Ma, consistent with late Oligocene to early Miocene acceleration of active deformation, uplift, and exhumation of the Pamirs. Plain Language Summary Central Asia has experienced prolonged climatic changes, from a relatively hot and humid climate, influenced by the Paratethys, to an extremely dry continental climate, during the Cenozoic. Precise chronological constraints on the sedimentary sequences that record this transition are required for resolving the forcing mechanisms behind this significant paleoclimate change. We report a reliable chronological framework for the lower Cenozoic sedimentary record in the Tajik Basin, which was occupied by the Paratethys during the early Cenozoic and a foreland basin related to uplift of the Pamir-Tian Shan orogen. Our new data help advance scientific understanding of the sea retreat, mountain building, and long-term climate changes in central Asia during the early Cenozoic.