Biogeochemistry drives diversity in the prokaryotes, fungi, and invertebrates of a Panama forest 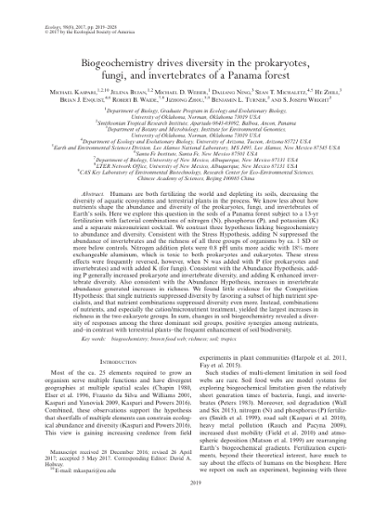 Copyright © 2017 by the Ecological Society of America

Humans are both fertilizing the world and depleting its soils, decreasing the diversity of aquatic ecosystems and terrestrial plants in the process. We know less about how nutrients shape the abundance and diversity of the prokaryotes, fungi, and invertebrates of Earth's soils. Here we explore this question in the soils of a Panama forest subject to a 13‐yr fertilization with factorial combinations of nitrogen (N), phosphorus (P), and potassium (K) and a separate micronutrient cocktail. We contrast three hypotheses linking biogeochemistry to abundance and diversity. Consistent with the Stress Hypothesis, adding N suppressed the abundance of invertebrates and the richness of all three groups of organisms by ca. 1 SD or more below controls. Nitrogen addition plots were 0.8 pH units more acidic with 18% more exchangeable aluminum, which is toxic to both prokaryotes and eukaryotes. These stress effects were frequently reversed, however, when N was added with P (for prokaryotes and invertebrates) and with added K (for fungi). Consistent with the Abundance Hypothesis, adding P generally increased prokaryote and invertebrate diversity, and adding K enhanced invertebrate diversity. Also consistent with the Abundance Hypothesis, increases in invertebrate abundance generated increases in richness. We found little evidence for the Competition Hypothesis: that single nutrients suppressed diversity by favoring a subset of high nutrient specialists, and that nutrient combinations suppressed diversity even more. Instead, combinations of nutrients, and especially the cation/micronutrient treatment, yielded the largest increases in richness in the two eukaryote groups. In sum, changes in soil biogeochemistry revealed a diversity of responses among the three dominant soil groups, positive synergies among nutrients, and–in contrast with terrestrial plants–the frequent enhancement of soil biodiversity.