Lithium mineral evolution and ecology: comparison with boron and beryllium 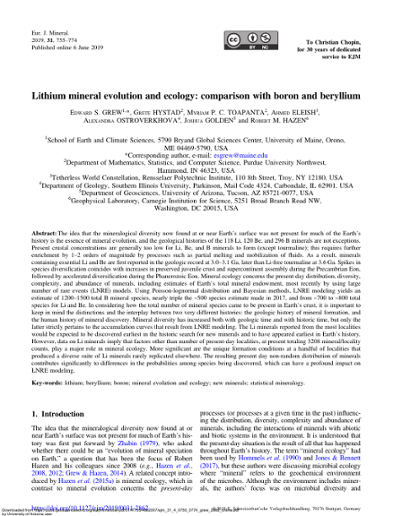 © 2019 The authors. This is an open-access article distributed under the terms of the Creative Commons Attribution License, which permits unrestricted use, distribution, and reproduction in any medium, provided the original work is properly cited. Commercial use right is not granted.

The idea that the mineralogical diversity now found at or near Earth's surface was not present for much of the Earth's history is the essence of mineral evolution, and the geological histories of the 118 Li, 120 Be, and 296 B minerals are not exceptions. Present crustal concentrations are generally too low for Li, Be, and B minerals to form (except tourmaline); this requires further enrichment by 1-2 orders of magnitude by processes such as partial melting and mobilization of fluids. As a result, minerals containing essential Li and Be are first reported in the geologic record at 3.0-3.1 Ga, later than Li-free tourmaline at 3.6 Ga. Spikes in species diversification coincides with increases in preserved juvenile crust and supercontinent assembly during the Precambrian Eon, followed by accelerated diversification during the Phanerozoic Eon. Mineral ecology concerns the present-day distribution, diversity, complexity, and abundance of minerals, including estimates of Earth's total mineral endowment, most recently by using large number of rare events (LNRE) models. Using Poisson-lognormal distribution and Bayesian methods, LNRE modeling yields an estimate of 1200-1500 total B mineral species, nearly triple the similar to 500 species estimate made in 2017, and from similar to 700 to similar to 800 total species for Li and Be. In considering how the total number of mineral species came to be present in Earth's crust, it is important to keep in mind the distinctions and the interplay between two very different histories: the geologic history of mineral formation, and the human history of mineral discovery. Mineral diversity has increased both with geologic time and with historic time, but only the latter strictly pertains to the accumulation curves that result from LNRE modeling. The Li minerals reported from the most localities would be expected to be discovered earliest in the historic search for new minerals and to have appeared earliest in Earth's history. However, data on Li minerals imply that factors other than number of present-day localities, at present totaling 3208 mineral/locality counts, play a major role in mineral ecology. More significant are the unique formation conditions at a handful of localities that produced a diverse suite of Li minerals rarely replicated elsewhere. The resulting present day non-random distribution of minerals contributes significantly to differences in the probabilities among species being discovered, which can have a profound impact on LNRE modeling.