Mystifying Realism: Representing Capitalism in the American Novel and Film from 1900 to the McCarthy Era 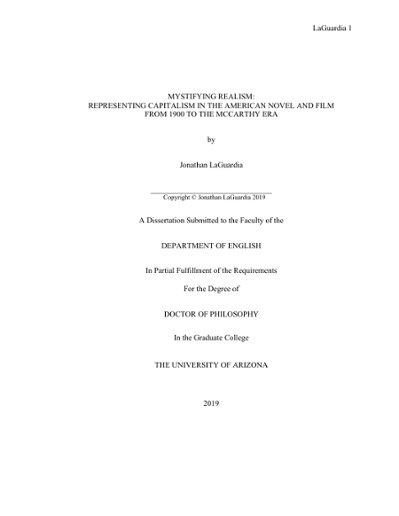 In this dissertation, I seek a partial answer to the question of how realism comprehends class membership, class performance, and class aspiration in the American novel and film from 1900 to the McCarthy era. I argue that the realism practiced by certain writers and filmmakers during the period comprehends these aspects of class by focusing attention on the “commodification of self-image” in the process of subject-formation. Each of the texts I consider describes an increasingly image-centered culture in which individuals turn to commodifying their self-images in their attempts to earn a wage. Entertainment becomes a viable means of survival in this context, but each text describes the self-fashioning involved in entertainment as a problematic artistic practice—one fraught with contradictions which nonetheless, they suggest, hold liberatory potential. As many of the characters fashion themselves into entertainers, their stories catalogue their simultaneous development of artistic sensibilities. Each text, in other words, offers a narrative of the development of the artist in the context of wage labor. Each aligns artistic practices with a wider variety of labor practices by defining “art” as the production of aesthetic value, and, in this way, each creates an opportunity for an analysis in which artistic practices and the practices of commodification are mutually critical. Aesthetic value becomes a meeting point and a mediator between economic (or material) and moral (or immaterial) concepts of value, and entertainment becomes a meeting point and mediator between artistic practices and the commodity market. In the chapters which follow, I explore these themes in the work of two novelists and two filmmakers, with particular emphasis on one major text from each: Theodore Dreiser (Sister Carrie, 1900), Charlie Chaplin (Modern Times, 1936), Nathanael West (The Day of the Locust, 1939), and William Wyler (Carrie, 1952). In “comprehending” class membership, performance, and aspiration, each of these texts has an analytical quality and a more active, interventional quality. On the one hand, each works to understand the meaning and significance of the connections among these aspects of class, rendering the interpellative actions of the American capitalist wage system available for analysis. On the other, they also seek to intervene along class lines in an existing “regime of sense” (using Barthes’s term), enacting a re-“distribution of the sensible” (using Rancière’s term). Or, to use a metaphor, they attempt to retune the primary tones and harmonic overtones of capitalist subject-formation. The aesthetic which emerges is class-oriented and anti-recuperative, and it engages the subject at the level of affect.