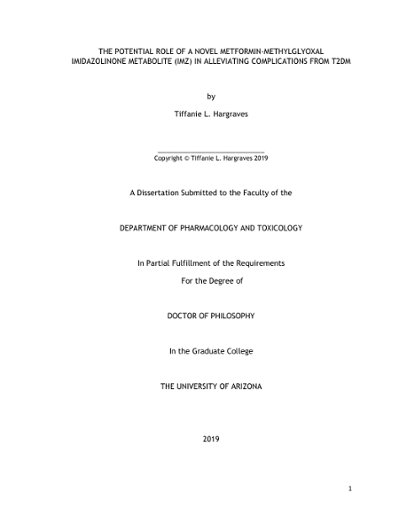 Reactive dicarbonyls, such as methylglyoxal (MGO), are elevated in the plasma of patients with type-two diabetes mellitus (T2DM). These endogenous electrophiles covalently modify proteins, which may contribute to diabetic complications. The T2DM first-line therapy, metformin (MF), significantly reduces adverse diabetic endpoints and mortality more effectively than other anti-hyperglycemic agents, the mechanism(s) of which remain unclear. We previously identified and characterized the product of the MF and MGO reaction as a novel imidazolinone metabolite (IMZ) in plasma and urine from patients with T2DM. The formation of IMZ, via scavenging of MGO by MF, represents a possible alternative mechanism of MF drug efficacy, in addition to its antigluconeogenesis properties. Imidazoline receptors (I1R-I3R) are novel targets for drug development in disorders associated with T2DM because they are involved in insulin secretion/sensitization and glucose homeostasis. Thus, we examined the ability of IMZ to modulate insulin-mediated cell signaling pathways in PC12 (express high levels of I1R and lack the α2-adrenergic receptor) and insulin resistant HEPG2 (a well-established model for assessing human liver metabolism) cells. In addition, the effects of IMZ on insulin secretion in MIN6 (best reflect normal pancreatic β-cell physiological conditions) cells were explored. Combination treatment of insulin and IMZ at physiologically relevant concentrations (1 pM & 1 nM) increased AKT and ERK1/2 phosphorylation above levels seen with insulin treatment alone in PC12 cells. This potentiation was not observed in the presence of the I1R antagonists efaroxan and idazoxan. IMZ also restored insulin sensitivity in insulin resistant HEPG2 cells via the AKT signaling pathway. Moreover, insulin secretion was increased in MIN6 cells exposed to various concentrations of IMZ (1 pM-1 uM) and this augmentation was inhibited by the I3R antagonist KU14R and siRNA mediated knockdown of nischarin (mouse homolog of imidazoline receptor antisera- selected protein). In addition, we explored the antidiabetic effects and possible intracellular signaling mechanisms engaged by IMZ in the well-established genetically obese db/db diabetic mouse model. Our results revealed that seven-day treatment of IMZ significantly alleviated insulin resistance, islet hypertrophy, hyperlipidemia, hepatic steatosis, adipocyte hypertrophy, and renal histopathological changes in db/db mice. In addition, IMZ promoted hepatic SIRT1 expression and the downregulation of SREBP1, ChREBP, ACC, and FAS at the protein and mRNA level in db/db mice. Finally, we investigated the long-term protective effects and potential mechanisms of activity exerted by IMZ in db/db mice alongside a clinically relevant dose of MF. The results from these studies demonstrated that IMZ significantly alleviated hyperglycemia, insulin resistance, islet hypertrophy, hyperlipidemia, hepatic steatosis, adipocyte hypertrophy, and renal histopathological changes similarly to MF in db/db mice treated with IMZ for 60 days. In addition, IMZ promoted hepatic downregulation of the lipogenesis and fibrosis markers ACACA, FASN, FN1, COL1A1, and TGFβ1 at the protein and mRNA level in db/db mice comparably to MF. The work in this dissertation therefore describes for the first time the protective effects of a MF metabolite in vitro and in vivo. Taken together, these findings support the hypothesis that the formation of IMZ may contribute to the antidiabetic properties of MF, with the potential to provide the structural basis of an effective agent in the management of T2DM. Although the precise underlying mechanism(s) of IMZ’s pharmacological action remain to be fully elucidated, the present work opens an intriguing window on the mechanism of the antidiabetic properties of MF.