Teaching an Old Dog New Tricks: Introducing a Hypothetical Mechanism of Synergy Between Metformin and New Generation mTOR Inhibitors in the Fight Against Cancer 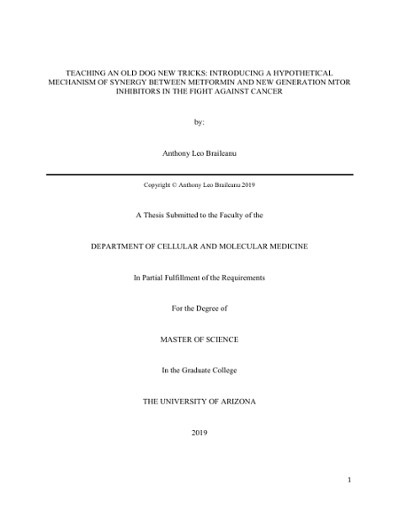 mTOR is a serine-threonine kinase and the central component of the complexes mTORC1 and mTORC2. The protein mTORC1 is most associated with global regulation of protein synthesis, cell growth, and cell division, with two of its most prominent actions involving the activation of the translational promoter S6K1, and inhibition of the translational suppressor, Eukaryotic Translation Initiation Factor 4E-Binding Protein 1 (4EBP1). The protein mTORC2 is not as well understood as mTORC1, but it has been most directly implicated with regulation of cell proliferation and cytoskeletal function. The most prominent substrates of mTORC2 are Serum- and Glucocorticoid-induced protein Kinase 1 (SGK1) and protein kinase B (Akt), both of which are inhibitors of the Fox0 transcription factor, which promotes apoptosis and inhibits the cell cycle. Cancers attributed to mTOR typically display simultaneous aberrant over activation of both complexes, while down-regulation of the mTOR complexes has been associated with anti-cancer, anti-autoimmune, and even anti-aging effects. First generation mTOR inhibitors such as rapamycin and its analogs function by allosterically inhibiting mTORC1 through FRB domain binding, but are ineffective at inhibiting mTORC2. This inherent preference for mTORC1 inhibition promotes drug resistance through compensatory PI3K activation via disruption of a negative feedback loop mitigated by the downstream mTORC1 substrate S6k1. In contrast to rapamycin analogs, second generation mTOR kinase inhibitors directly target the catalytic domain of mTOR, consequently inhibiting both complexes and significantly reducing drug resistance. The latest generation of mTOR inhibitors effectively exploit the close physical proximity between the allosteric and catalytic ATP binding site of mTOR by essentially linking a rapamycin analog to an mTOR kinase inhibitor, and have thus far displayed promising results in pre-clinical trials. Metformin has been prescribed to treat hyperglycemia in type II diabetics since 1995. Numerous retrospective epidemiological studies spanning over two decades show us that patients prescribed metformin have a better prognosis against cancer. The anti-tumor efficacy of metformin has also been demonstrated both in vitro and in vivo on a vast array of cancers including breast, colorectal, endometrial, ovarian, thyroid, lung, and gastric cancers. Metformin’s mechanism of action involves inhibition of ETC Complex I, resulting in AMPK activation by virtue of increased AMP:ATP ratio. Activated AMPK has the downstream effect of inhibiting mTORC1 while promoting the activation of the tumor suppressing p53 transcription factor. The activation of AMPK has the additional effect of lowering blood glucose by reducing gluconeogenesis in the liver and promoting upregulation of GLUT4 glucose transporters in skeletal muscle and adipose tissue. The resulting insulin independent glucose uptake circumvents PI3K signaling which in turn inhibits both mTORC1 and mTORC2. Although synergy between metformin and new generation mTOR inhibitors has not yet been explored, I predict the two will synergize to an even greater extent than what has previously been seen with first generation rapamycin analogs. Metformin’s action of effectively lowering intracellular ATP by way of ETC inhibition may be instrumental for increasing the efficiency of mTORKI’s competition with ATP for the mTOR catalytic domain. Metformin’s direct and indirect inhibition of PI3K, in addition to its proven clinical safety may warrant further clinical trials for use as a complementary cytostatic agent in supplementing the standard chemotherapeutic treatment of breast cancer. Upregulation of both insulin and IGF receptors is seen in virtually every subtype of breast cancer, and patient prognosis is negatively correlated with the degree of upregulation. Additionally, breast cancer morbidities have been shown to be directly correlated with high serum insulin levels. BRCA-1 mutant breast cancers have been shown to upregulate IGF-1 receptors in several studies and the BRCA-1 gene is in itself a suppressor of IGF-1R transcription. Metformin’s potential efficacy towards BRCA-1 breast cancers may impact large populations as genetic testing becomes more of a commonplace in preventative medicine. High risk BRCA-1 mutant carriers may one day be prescribed a safe, low dose prophylactic of the drug. Metformin may additionally be indicated even more so against breast cancers that upregulate human epidermal growth factor receptor 2, as the HER2 receptor is also a PI3K activator. Drug synergy has important clinical implications because it indicates lower therapeutic dosages, thus potentially reducing or counteracting the side effects attributed with individual drugs.