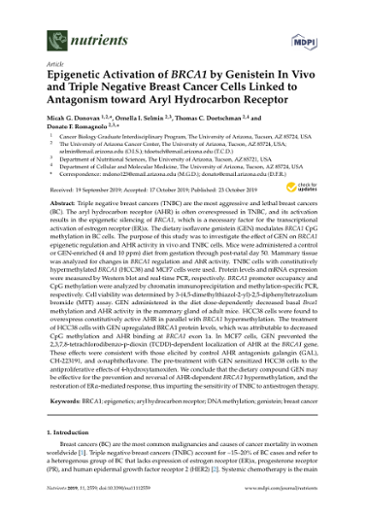 Copyright © 2019 by the authors. Licensee MDPI, Basel, Switzerland. This article is an open access article distributed under the terms and conditions of the Creative Commons Attribution (CC BY) license (http://creativecommons.org/licenses/by/4.0/).

Triple negative breast cancers (TNBC) are the most aggressive and lethal breast cancers (BC). The aryl hydrocarbon receptor (AHR) is often overexpressed in TNBC, and its activation results in the epigenetic silencing of BRCA1, which is a necessary factor for the transcriptional activation of estrogen receptor (ER)α. The dietary isoflavone genistein (GEN) modulates BRCA1 CpG methylation in BC cells. The purpose of this study was to investigate the effect of GEN on BRCA1 epigenetic regulation and AHR activity in vivo and TNBC cells. Mice were administered a control or GEN-enriched (4 and 10 ppm) diet from gestation through post-natal day 50. Mammary tissue was analyzed for changes in BRCA1 regulation and AhR activity. TNBC cells with constitutively hypermethylated BRCA1 (HCC38) and MCF7 cells were used. Protein levels and mRNA expression were measured by Western blot and real-time PCR, respectively. BRCA1 promoter occupancy and CpG methylation were analyzed by chromatin immunoprecipitation and methylation-specific PCR, respectively. Cell viability was determined by 3-(4,5-dimethylthiazol-2-yl)-2,5-diphenyltetrazolium bromide (MTT) assay. GEN administered in the diet dose-dependently decreased basal Brca1 methylation and AHR activity in the mammary gland of adult mice. HCC38 cells were found to overexpress constitutively active AHR in parallel with BRCA1 hypermethylation. The treatment of HCC38 cells with GEN upregulated BRCA1 protein levels, which was attributable to decreased CpG methylation and AHR binding at BRCA1 exon 1a. In MCF7 cells, GEN prevented the 2,3,7,8-tetrachlorodibenzo-p-dioxin (TCDD)-dependent localization of AHR at the BRCA1 gene. These effects were consistent with those elicited by control AHR antagonists galangin (GAL), CH-223191, and α-naphthoflavone. The pre-treatment with GEN sensitized HCC38 cells to the antiproliferative effects of 4-hydroxytamoxifen. We conclude that the dietary compound GEN may be effective for the prevention and reversal of AHR-dependent BRCA1 hypermethylation, and the restoration of ERα-mediated response, thus imparting the sensitivity of TNBC to antiestrogen therapy.