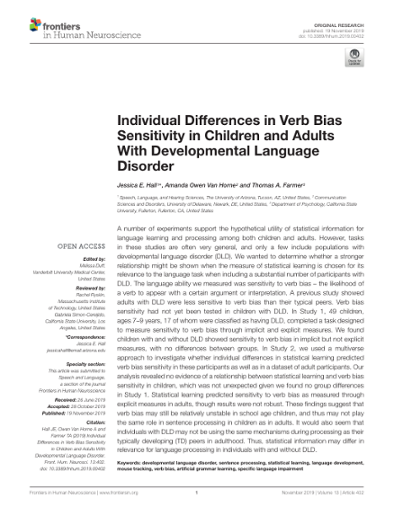 Copyright © 2019 Hall, Owen Van Horne and Farmer. This is an open-access article distributed under the terms of the Creative Commons Attribution License (CC BY). The use, distribution or reproduction in other forums is permitted, provided the original author(s) and the copyright owner(s) are credited and that the original publication in this journal is cited, in accordance with accepted academic practice. No use, distribution or reproduction is permitted which does not comply with these terms.

A number of experiments support the hypothetical utility of statistical information for language learning and processing among both children and adults. However, tasks in these studies are often very general, and only a few include populations with developmental language disorder (DLD). We wanted to determine whether a stronger relationship might be shown when the measure of statistical learning is chosen for its relevance to the language task when including a substantial number of participants with DLD. The language ability we measured was sensitivity to verb bias – the likelihood of a verb to appear with a certain argument or interpretation. A previous study showed adults with DLD were less sensitive to verb bias than their typical peers. Verb bias sensitivity had not yet been tested in children with DLD. In Study 1, 49 children, ages 7–9 years, 17 of whom were classified as having DLD, completed a task designed to measure sensitivity to verb bias through implicit and explicit measures. We found children with and without DLD showed sensitivity to verb bias in implicit but not explicit measures, with no differences between groups. In Study 2, we used a multiverse approach to investigate whether individual differences in statistical learning predicted verb bias sensitivity in these participants as well as in a dataset of adult participants. Our analysis revealed no evidence of a relationship between statistical learning and verb bias sensitivity in children, which was not unexpected given we found no group differences in Study 1. Statistical learning predicted sensitivity to verb bias as measured through explicit measures in adults, though results were not robust. These findings suggest that verb bias may still be relatively unstable in school age children, and thus may not play the same role in sentence processing in children as in adults. It would also seem that individuals with DLD may not be using the same mechanisms during processing as their typically developing (TD) peers in adulthood. Thus, statistical information may differ in relevance for language processing in individuals with and without DLD.