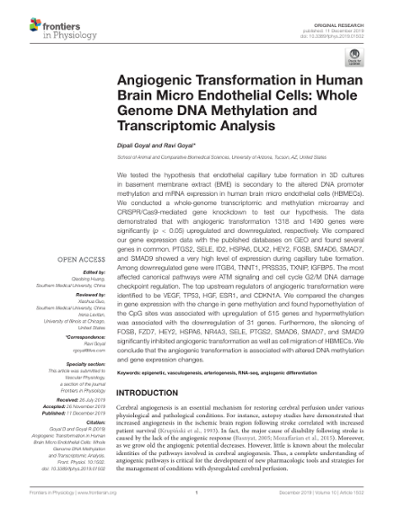 Copyright © 2019 Goyal and Goyal. This is an open-access article distributed under the terms of the Creative Commons Attribution License (CC BY). The use, distribution or reproduction in other forums is permitted, provided the original author(s) and the copyright owner(s) are credited and that the original publication in this journal is cited, in accordance with accepted academic practice. No use, distribution or reproduction is permitted which does not comply with these terms.

We tested the hypothesis that endothelial capillary tube formation in 3D cultures in basement membrane extract (BME) is secondary to the altered DNA promoter methylation and mRNA expression in human brain micro endothelial cells (HBMECs). We conducted a whole-genome transcriptomic and methylation microarray and CRISPR/Cas9-mediated gene knockdown to test our hypothesis. The data demonstrated that with angiogenic transformation 1318 and 1490 genes were significantly (p < 0.05) upregulated and downregulated, respectively. We compared our gene expression data with the published databases on GEO and found several genes in common. PTGS2, SELE, ID2, HSPA6, DLX2, HEY2, FOSB, SMAD6, SMAD7, and SMAD9 showed a very high level of expression during capillary tube formation. Among downregulated gene were ITGB4, TNNT1, PRSS35, TXNIP, IGFBP5. The most affected canonical pathways were ATM signaling and cell cycle G2/M DNA damage checkpoint regulation. The top upstream regulators of angiogenic transformation were identified to be VEGF, TP53, HGF, ESR1, and CDKN1A. We compared the changes in gene expression with the change in gene methylation and found hypomethylation of the CpG sites was associated with upregulation of 515 genes and hypermethylation was associated with the downregulation of 31 genes. Furthermore, the silencing of FOSB, FZD7, HEY2, HSPA6, NR4A3, SELE, PTGS2, SMAD6, SMAD7, and SMAD9 significantly inhibited angiogenic transformation as well as cell migration of HBMECs. We conclude that the angiogenic transformation is associated with altered DNA methylation and gene expression changes.