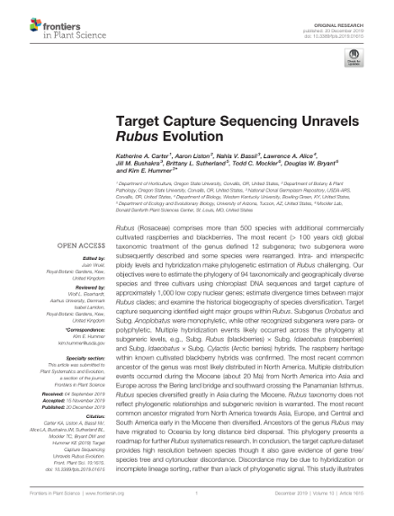 Copyright © 2019 Carter, Liston, Bassil, Alice, Bushakra, Sutherland, Mockler, Bryant and Hummer. This is an open-access article distributed under the terms of the Creative Commons Attribution License (CC BY).

Rubus (Rosaceae) comprises more than 500 species with additional commercially cultivated raspberries and blackberries. The most recent (> 100 years old) global taxonomic treatment of the genus defined 12 subgenera; two subgenera were subsequently described and some species were rearranged. Intra- and interspecific ploidy levels and hybridization make phylogenetic estimation of Rubus challenging. Our objectives were to estimate the phylogeny of 94 taxonomically and geographically diverse species and three cultivars using chloroplast DNA sequences and target capture of approximately 1,000 low copy nuclear genes; estimate divergence times between major Rubus clades; and examine the historical biogeography of species diversification. Target capture sequencing identified eight major groups within Rubus. Subgenus Orobatus and Subg. Anoplobatus were monophyletic, while other recognized subgenera were para- or polyphyletic. Multiple hybridization events likely occurred across the phylogeny at subgeneric levels, e.g., Subg. Rubus (blackberries) × Subg. Idaeobatus (raspberries) and Subg. Idaeobatus × Subg. Cylactis (Arctic berries) hybrids. The raspberry heritage within known cultivated blackberry hybrids was confirmed. The most recent common ancestor of the genus was most likely distributed in North America. Multiple distribution events occurred during the Miocene (about 20 Ma) from North America into Asia and Europe across the Bering land bridge and southward crossing the Panamanian Isthmus. Rubus species diversified greatly in Asia during the Miocene. Rubus taxonomy does not reflect phylogenetic relationships and subgeneric revision is warranted. The most recent common ancestor migrated from North America towards Asia, Europe, and Central and South America early in the Miocene then diversified. Ancestors of the genus Rubus may have migrated to Oceania by long distance bird dispersal. This phylogeny presents a roadmap for further Rubus systematics research. In conclusion, the target capture dataset provides high resolution between species though it also gave evidence of gene tree/species tree and cytonuclear discordance. Discordance may be due to hybridization or incomplete lineage sorting, rather than a lack of phylogenetic signal. This study illustrates the importance of using multiple phylogenetic methods when examining complex groups and the utility of software programs that estimate signal conflict within datasets.

Except where otherwise noted, this item's license is described as Copyright © 2019 Carter, Liston, Bassil, Alice, Bushakra, Sutherland, Mockler, Bryant and Hummer. This is an open-access article distributed under the terms of the Creative Commons Attribution License (CC BY).