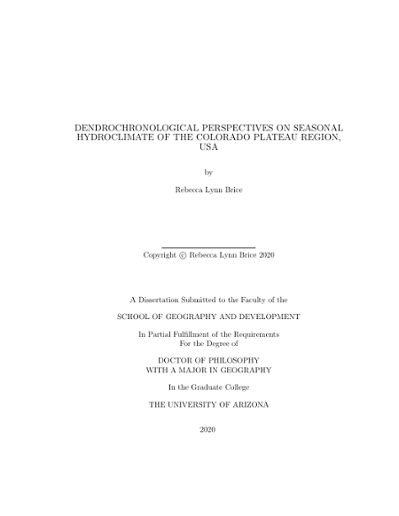 The recent, prolonged drought and increasing aridity with climate change in the Colorado Plateau region has led to dramatic and lasting impacts to water resources and ecosystems, and has led to questions about the viability of native communities in this already arid place. Rising temperatures evaporate moisture from the surface water critical to livestock and municipal supplies, and evaporate water from soil moisture essential for plant growth and water storage. Snow, the dominant source for surface water on the Colorado Plateau, is projected to decline across the western United States with a warmer future. As a consequence of drought, warming tem- peratures, and changes in winter precipitation, water availability is a critical issue to local communities and to water managers on the Colorado Plateau. In this dissertation, I consider water resources of the Colorado Plateau in terms of the seasonal climate variables that influence those water resources during the period of instrumental data collection, and over the long-term tree-ring derived reconstructed record. The deficiency of long-term hydroclimatic records in this re- gion precludes deeper analysis of the hydroclimatic relationships affecting water resources on the Colorado Plateau. Limited record length inhibits the ability to evaluate trends and short records fail to capture substantial variation expected in semi-arid regions. A short period of overlap makes it difficult to assess relation- ships of precipitation, temperature, and streamflow with other variables such as soil moisture and snow water equivalent. Here, I use three aspects of dendrochronology to consider water on the Colorado Plateau, and evaluate the potential to expand dendrochronological science in the region. The first study investigates the potential for tree rings in the Four Corners to serve as proxies of long-term seasonal climate variability at a regional scale. I evaluated the trees ability to capture monthly precipitation and temperature using earlywood and latewood ring-widths. I found statistically significant relation- ships between earlywood- /latewood-widths and season-specific climate variables, and that the earlywood of Douglas-fir and Ponderosa pine exhibit a warm-season temperature signal. The documentation of a temperature proxy embedded in the earlywood of species commonly used in dendrochronological research opens new avenues for climate reconstructions that have immediate implications for climate change adaptation The second study systematically evaluates the poorly understood relationship between autumn soil moisture and variations in streamflow in the Upper Colorado River Basin. I examined the soil moisture-flow relationship during the instrumental period. Findings suggest that soil moisture has a statistically significant relationship to low streamflow when soil moisture is dry in the previous autumn, and to high streamflow when soil moisture is wet in the previous autumn. Then, I explored the potential for using tree-rings to reconstruct autumn soil moisture in the Upper Colorado River Basin. I found a variable soil moisture-streamflow relationship that could be influenced by prolonged wet or dry conditions, and that is not replicated in the tree-ring derived reconstruction. These results provide new insight into the soil moisture-flow relationship over the instrumental period and may inform future water resources decision-making in the future. The third and final study was motivated by the Navajo Nation Department of Water Resources water managers questions concerning snowpack and surface waters in the Chuska Mountains. Projected declines in snowpack in the western United States associated with broad-scale anthropogenic warming are tightly linked to surface runoff. This is worrisome for the Navajo Nation who disproportionately rely on snow-fed surface waters of the Chuska Mountains, which provide water for traditional summer grazing and agricultural farms, but that have in recent years begun to go dry. To identify long-term trends and variability in snowpack in the Chuska Mountains, I utilized tree rings to produce the two 300-year long snowpack reconstructions for Chuska Mountain snowpack. I compared the two reconstructions in terms of their usefulness for Navajo water managers. In each reconstruction, past snow droughts were evaluated relative to the two most recent severe droughts, the millennium drought ( 2000 to present), and the 1950s drought. Critically, the 1950s drought, from which Navajo tribal members report experiencing severe impacts to their livelihoods, is rivaled and exceeded by other dry snowpack periods prior to the 20th century. The severity and persistence of past snow droughts, which occurred without anthropogenic forcing, signal potential future declines in Navajo snowpack if warming trends continue.