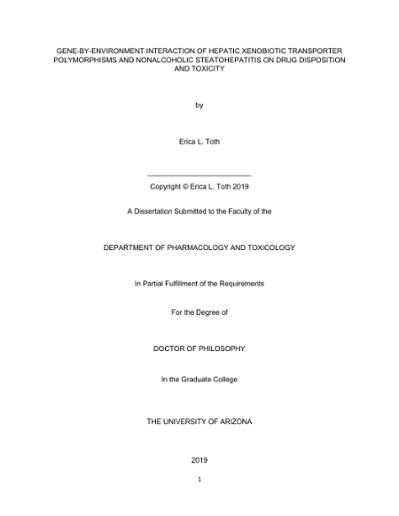 Nonalcoholic steatohepatitis (NASH) is the advanced form of nonalcoholic fatty liver disease and is the hepatic manifestation of metabolic syndrome. The overall rate of NASH is on the rise globally, and currently approximately 1.5-6.45% of the population is afflicted with this disease(Z. M. Younossi et al., 2016). The progression of NASH is known to result in the dysregulation of many genes, including those that are responsible for ADME processes. These changes can alter the disposition of xenobiotics and result in adverse drug reactions (ADRs). Since ADRs are becoming increasingly frequent, with nearly 1 in 20 hospital patients experiencing ADRs in the United States(Bourgeois, Shannon, Valim, & Mandl, 2010), determining the factors that contribute to variations in drug response is increasingly important. Additionally, genetic polymorphisms are known to cause pharmacokinetic variations, and many of them have been extensively researched for their impacts on patient response. Less known, however, is how genetic polymorphisms and chronic liver disease interact, and how that interaction may increase patient risk for ADRs. As the goal of precision medicine is to provide the right dose to the right person at the right time, determining how factors like disease state can interact with genetic polymorphisms to alter pharmacokinetics can provide a better basis for individualized dosing. The purpose behind this study was therefore to utilize a methionine- and choline-deficient (MCD) rodent model to determine the gene-by-environment interactions of hepatic xenobiotic transporter polymorphisms and NASH on the disposition and toxicity of pharmaceutical compounds. To identify the impact of these gene-by-environment interactions, pharmacokinetic studies were designed to investigate the alterations to drug distribution that occurred with NASH in combination with disruptions of hepatic uptake and efflux transporters and to determine the underlying mechanism behind pharmacokinetic alterations during disease progression. The results in the MCD rodent model of NASH found a synergistic interaction between polymorphisms of both hepatic uptake and efflux transporters and NASH that lead to changes in plasma retention and biliary excretion of probe substrates. The comparison between biliary excretion of SN-38 in wild-type and Bcrp-/- rats demonstrated this synergistic interaction, as no alterations were found in biliary AUCs until the combination of the disease and genetic disruption, where biliary excretion significantly decreased. A similar interaction was demonstrated in a study investigating the gene dose of Oatp1b2 and NASH on pravastatin disposition, where the combination of full genetic Oatp1b2 knockout along with NASH was necessary to see dramatic increases in plasma AUC and tissue concentrations. Finally, in order to identify the underlying mechanism by which NASH alters pharmacokinetics, the disposition of sorafenib-glucuronide was determined in wild-type, Oatp1a/1b cluster knockouts, and Mrp2 knockouts, with and without MCD diet. By comparing the changes to plasma AUC and liver concentrations in these groups, the disruption to hepatocyte hopping that occurs during NASH was made quantifiable. In summation, these data identify synergistic gene-by-environment interactions of hepatic xenobiotic transporter polymorphisms and NASH, the alterations that these interactions cause to drug disposition, and the mechanism by which NASH causes pharmacokinetic changes through disruption of hepatocellular shuttling.