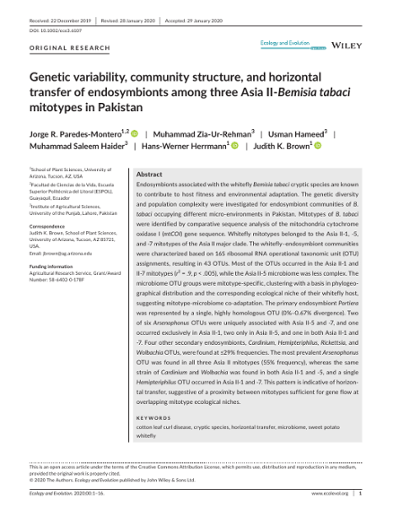 Copyright © 2020 The Authors. Ecology and Evolution published by John Wiley & Sons Ltd. This is an open access article under the terms of the Creative Commons Attribution License, which permits use, distribution and reproduction in any medium, provided the original work is properly cited.

Endosymbionts associated with the whitefly Bemisia tabaci cryptic species are known to contribute to host fitness and environmental adaptation. The genetic diversity and population complexity were investigated for endosymbiont communities of B. tabaci occupying different micro-environments in Pakistan. Mitotypes of B. tabaci were identified by comparative sequence analysis of the mitochondria cytochrome oxidase I (mtCOI) gene sequence. Whitefly mitotypes belonged to the Asia II-1, -5, and -7 mitotypes of the Asia II major clade. The whitefly-endosymbiont communities were characterized based on 16S ribosomal RNA operational taxonomic unit (OTU) assignments, resulting in 43 OTUs. Most of the OTUs occurred in the Asia II-1 and II-7 mitotypes (r(2) = .9, p < .005), while the Asia II-5 microbiome was less complex. The microbiome OTU groups were mitotype-specific, clustering with a basis in phylogeographical distribution and the corresponding ecological niche of their whitefly host, suggesting mitotype-microbiome co-adaptation. The primary endosymbiont Portiera was represented by a single, highly homologous OTU (0%-0.67% divergence). Two of six Arsenophonus OTUs were uniquely associated with Asia II-5 and -7, and one occurred exclusively in Asia II-1, two only in Asia II-5, and one in both Asia II-1 and -7. Four other secondary endosymbionts, Cardinium, Hemipteriphilus, Rickettsia, and Wolbachia OTUs, were found at <= 29% frequencies. The most prevalent Arsenophonus OTU was found in all three Asia II mitotypes (55% frequency), whereas the same strain of Cardinium and Wolbachia was found in both Asia II-1 and -5, and a single Hemipteriphilus OTU occurred in Asia II-1 and -7. This pattern is indicative of horizontal transfer, suggestive of a proximity between mitotypes sufficient for gene flow at overlapping mitotype ecological niches.

Except where otherwise noted, this item's license is described as Copyright © 2020 The Authors. Ecology and Evolution published by John Wiley & Sons Ltd. This is an open access article under the terms of the Creative Commons Attribution License, which permits use, distribution and reproduction in any medium, provided the original work is properly cited.