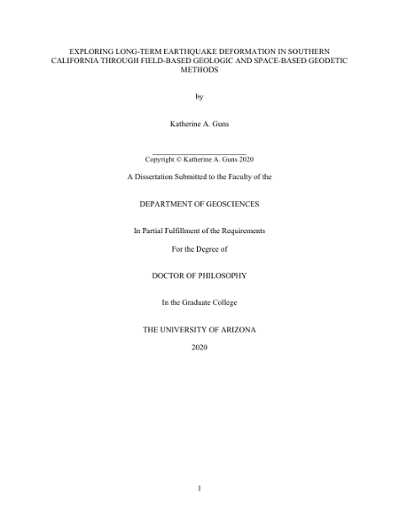 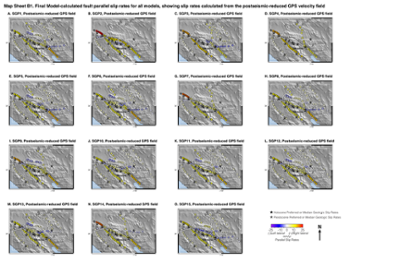 The San Andreas plate boundary zone in southern California is characterized by a broad network of interlacing faults, working within different provinces of activity to accommodate modern Pacific – North America plate boundary motion. These tectonic provinces vary in their fault morphology from transpressional east-west trending faults of the Transverse Ranges, to transtensional northwest trending faults of the southern Mojave in the Eastern California Shear Zone (ECSZ), to the main dextral Southern San Andreas Fault (SSAF) running through the center of it all. Characterizing how strain accumulation translates to earthquake deformation along different areas of a plate boundary fault system is a critical goal for better understanding how faults can work together to accommodate plate boundary motion and for assessing the seismic hazards along individual faults in the system. Achieving this goal, however, requires integrating different perspectives and evidence from all aspects of the active tectonics field, from field-based measurements of paleoseismic offsets and chronologies through tectonic geomorphology and paleoseismic trenching, to modern space-based observations of crustal velocities and strain rates using Global Positioning System (GPS) and Interferometric Synthetic Aperture Radar (InSAR) measurements, to measurements of crustal seismicity and seismic waveform analysis of recent events, to synthesis modeling studies based on crustal dynamics. In this dissertation, I have endeavored to complete an interdisciplinary analysis of fault motion and crustal deformation in southern California, in order to better characterize the current slip rates of faults in and around San Gorgonio Pass and in particular, to deepen our understanding of the possible mechanisms of slip and strain transfer that must exist between the SSAF system and the southern ECSZ system. In this effort, I have sought to quantify the effect of ongoing viscoelastic postseismic displacements on the modern deformation field in southern California. I have found that postseismic displacements caused by twelve large magnitude earthquakes are measureable with high precision GPS measurements and thus are affecting crustal velocity estimates. Some of these earthquakes occurred over a century ago, revealing a possibility that postseismic deformation and its effect on the deformation field can last longer than we currently assume. Accounting for these postseismic displacements using the method developed in this work leads to a more accurate time-invariant GPS velocity field. We apply our newly created postseismic-reduced velocity field to elastic fault block models of faults in and around San Gorgonio Pass, and find that removing postseismic motions from the deformation field reduces misfit statistics by up to 50%, depending on fault geometry, when compared with our observed (unreduced) GPS velocity field. In addition, removing postseismic displacements also decreases estimated fault slip rates on nearly all faults in our model. Only one of our fifteen model block geometries is able to resolve a persistent slip rate discrepancy along the Mojave and San Bernardino sections of the SSAF system, and it can only do so with the removal of all activity on ECSZ faults. This intriguing result may be further evidence for a possible balancing connection between the SSAF system and the ECSZ system. Lastly, in order to determine whether block rotation may still be a mechanism of slip transfer between the SSAF and ECSZ, and to fill a gap in our knowledge of Eastern Transverse Ranges (ETR) fault slip rates, I conduct the first tectonic-geomorphologic slip rate study along the Blue Cut Fault. Geomorphic mapping and 10Be surface exposure dating indicate an overall time-averaged slip rate of 1.66 ± 0.44 mm/yr (± 2σ uncertainties), however an analysis of individual surface slip rates indicates that rates of slip may have slowed since ~102 – 68 ka. A slowing Blue Cut Fault suggests a slowing rate of possible block rotation, and implies that other mechanisms of slip transfer must be at work in order to enable elastic strain transfer from the SSAF to the recently active ECSZ.