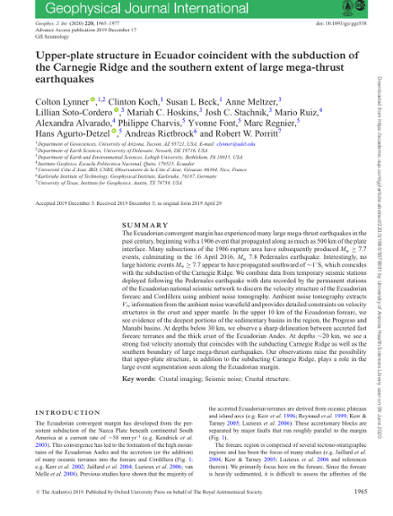 © The Author(s) 2019. Published by Oxford University Press on behalf of The Royal Astronomical Society.

The Ecuadorian convergent margin has experienced many large mega-thrust earthquakes in the past century, beginning with a 1906 event that propagated along as much as 500 km of the plate interface. Many subsections of the 1906 rupture area have subsequently produced M-w >= 7.7 events, culminating in the 16 April 2016, M-w 7.8 Pedernales earthquake. Interestingly, no large historic events M-w >= 7.7 appear to have propagated southward of similar to 1 degrees S, which coincides with the subduction of the Carnegie Ridge. We combine data from temporary seismic stations deployed following the Pedernales earthquake with data recorded by the permanent stations of the Ecuadorian national seismic network to discern the velocity structure of the Ecuadorian forearc and Cordillera using ambient noise tomography. Ambient noise tomography extracts V-sv information from the ambient noise wavefield and provides detailed constraints on velocity structures in the crust and upper mantle. In the upper 10 km of the Ecuadorian forearc, we see evidence of the deepest portions of the sedimentary basins in the region, the Progreso and Manabi basins. At depths below 30 km, we observe a sharp delineation between accreted fast forearc terranes and the thick crust of the Ecuadorian Andes. At depths similar to 20 km, we see a strong fast velocity anomaly that coincides with the subducting Carnegie Ridge as well as the southern boundary of large mega-thrust earthquakes. Our observations raise the possibility that upper-plate structure, in addition to the subducting Carnegie Ridge, plays a role in the large event segmentation seen along the Ecuadorian margin.