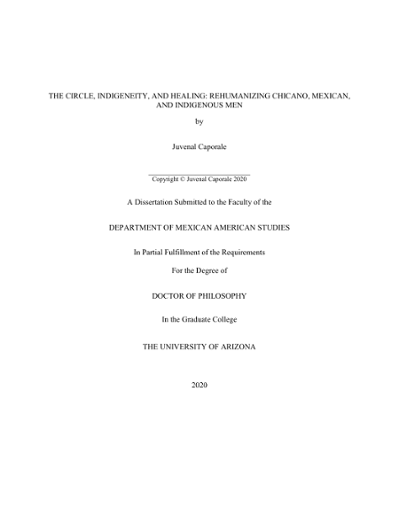 This study explores how Chicano, Mexican, and Indigenous men negotiated and navigated dehumanization and re-humanized themselves through the development of a cultural consciousness based on Indigenous frameworks and epistemologies that emphasize healing, socio-political teachings, and dialogue. Specifically, it focuses on a contemporary community-based group, the Círculo de Hombres in San Diego, that is part of the Izcalli (a Nahuatl word that translates to “the House of Re-awakening”) non-profit organization, who helps young and older men cope with the intergenerational traumas that resulted from colonization by (re)connecting them to their Indigenous culture. By exposing them to Indigenous-based pedagogies, men of this cultural group heal and re-humanize themselves through Maya-Nahua Indigenous-based concepts and teachings. Consequently, the intent of my work is to highlight how men of this cultural group move from a position of dehumanization to re-humanization using Indigenous-based pedagogies. The second chapter describes my Freirean pedagogical framework that highlights liberatory possibilities for Chicano, Mexican, and Indigenous men. I argue that Freire’s concept of liberatory praxis facilitates the process of re-humanization as men move away from the mechanisms of dehumanization. Next, I provide a brief literature review on how these concepts emerged. I then address the Indigenous-based pedagogies that men engage in. I argue that this allows men to transform themselves and their community through Maya-Nahua concepts of their maíz-based culture. The third chapter describes the methodology of my project—semi-structured interviews that were complemented with ethnographic research—and the qualitative methods utilized to collect data. To capture the lived experiences of the men from the Círculo de Hombres in San Diego, 50 Chicano, Mexican and Indigenous men from the ages of 21 to 74 were men recruited to participate in the study. The recruitment process was primarily based on their experience in the program with a heavy focus on those who had participated in it the longest, especially those who joined in circa 1998. However, new members of this group were also recruited. Essentially, this study aimed for men telling their own stories, using their own voices. The fourth, fifth, and sixth chapters report the findings and themes that emerged from the interviews with the 50 men. The main themes of this study were: change through dialogue, Indigenous spirituality, and social justice. Specifically, 94% of the men indicated that the Círculo de Hombres changed them, 92% of the men maintained that their views on spirituality changed because of their involvement in the program, and 84% of the men became interested in social justice issues because of their participation in the group. The seventh chapter provides a discussion of my findings. The Círculo de Hombres plays a pivotal role in transforming the lives of Chicano, Mexican, and Indigenous men through Indigenous-based pedagogies rooted in ongoing dialogue and a social justice orientation. As men learn to reconnect with their Indigenous-based culture through ceremonies, men not only re-humanize themselves and move away from practices associated with dehumanization but also learn to heal from their traumas and find balance. Implications and final remarks are discussed in the concluding chapter. The hope of this study was to highlight the processes associated with re-humanization and re-Indigenization, in relation to ceremonies, emphasizing how men how transformed their themselves and their communities.