A Cultural and Environmental History of Paricutin: Volcano in a Cornfield 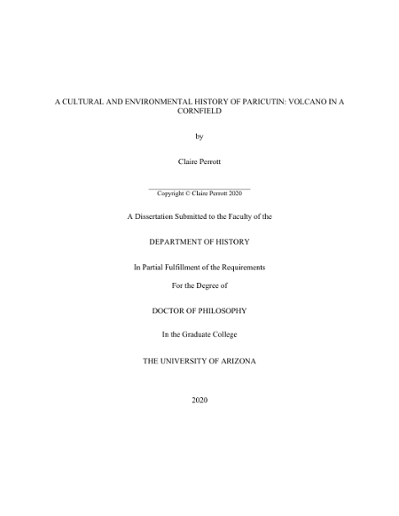 A volcano grew out of a cornfield in Michoacán, Mexico in 1943, completely transforming the landscape and local people’s lives. Immediately following the news of this new volcano named Parícutin, observers flocked to the area. Within the first two years of activity, the volcano grew to about 1,400 feet, covered two villages with lava, and blanketed three villages with ash. The volcano gained attention because of its sudden appearance and mild eruptions that observers could closely watch, making it the first volcano in modern times that scientists could study from its birth. Different groups including locals, scientists, artists, journalists, and tourists, had distinct interactions with the volcano that reflect a profound national cultural examination. This study focuses on how visitors and locals interpreted and experienced the volcano. Recorded in written and visual documents, these various perceptions turned Parícutin into a symbol of national identity, or mexicanidad. The inhabitants of the area, who were mainly of Purépecha descent, rationalized it as a punishment for sinful behavior. Meanwhile, the national government exploited it as a scientific phenomenon and an opportunity to insert their idea of mexicanidad into the socially isolated Purépecha highlands. In their accounts of Parícutin, outsiders gave voice to popular ideas about the volcano, but silenced the role of villagers outside of the initial eruption and evacuation stories. Visual sources including photographs and artwork reveal a more comprehensive history of the volcano, one that incorporates people excluded from the written record. This research not only contributes to the scholarship on Mexican national identity, but it also acts as a microhistory for how a community reacts to changes in landscape. In a world with increasing environmental uncertainty, that is most harmful for marginalized communities, this work looks at how culture influences reactions to natural disasters and vice-versa.