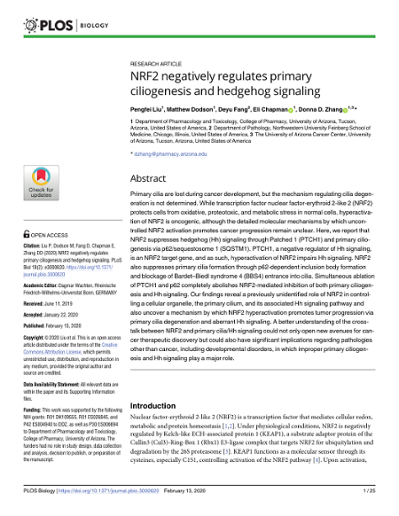 Copyright © 2020 Liu et al. This is an open access article distributed under the terms of the Creative Commons Attribution License, which permits unrestricted use, distribution, and reproduction in any medium, provided the original author and source are credited.

Primary cilia are lost during cancer development, but the mechanism regulating cilia degeneration is not determined. While transcription factor nuclear factor-erythroid 2-like 2 (NRF2) protects cells from oxidative, proteotoxic, and metabolic stress in normal cells, hyperactivation of NRF2 is oncogenic, although the detailed molecular mechanisms by which uncontrolled NRF2 activation promotes cancer progression remain unclear. Here, we report that NRF2 suppresses hedgehog (Hh) signaling through Patched 1 (PTCH1) and primary ciliogenesis via p62/sequestosome 1 (SQSTM1). PTCH1, a negative regulator of Hh signaling, is an NRF2 target gene, and as such, hyperactivation of NRF2 impairs Hh signaling. NRF2 also suppresses primary cilia formation through p62-dependent inclusion body formation and blockage of Bardet-Biedl syndrome 4 (BBS4) entrance into cilia. Simultaneous ablation of PTCH1 and p62 completely abolishes NRF2-mediated inhibition of both primary ciliogenesis and Hh signaling. Our findings reveal a previously unidentified role of NRF2 in controlling a cellular organelle, the primary cilium, and its associated Hh signaling pathway and also uncover a mechanism by which NRF2 hyperactivation promotes tumor progression via primary cilia degeneration and aberrant Hh signaling. A better understanding of the crosstalk between NRF2 and primary cilia/Hh signaling could not only open new avenues for cancer therapeutic discovery but could also have significant implications regarding pathologies other than cancer, including developmental disorders, in which improper primary ciliogenesis and Hh signaling play a major role.