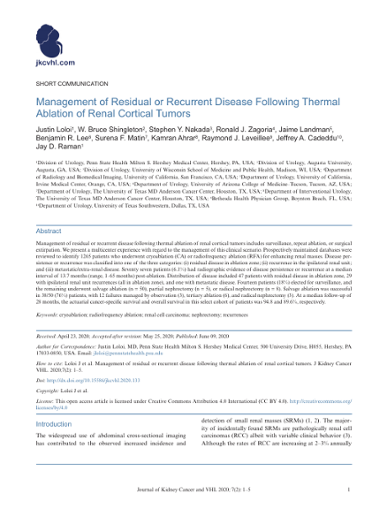 JOURNAL OF KIDNEY CANCER AND VHL

Management of residual or recurrent disease following thermal ablation of renal cortical tumors includes surveillance, repeat ablation, or surgical extirpation. We present a multicenter experience with regard to the management of this clinical scenario. Prospectively maintained databases were reviewed to identify 1265 patients who underwent cryoablation (CA) or radiofrequency ablation (RFA) for enhancing renal masses. Disease persistence or recurrence was classified into one of the three categories: (i) residual disease in ablation zone; (ii) recurrence in the ipsilateral renal unit; and (iii) metastatic/extra-renal disease. Seventy seven patients (6.1%) had radiographic evidence of disease persistence or recurrence at a median interval of 13.7 months (range, 1-65 months) post-ablation. Distribution of disease included 47 patients with residual disease in ablation zone, 29 with ipsilateral renal unit recurrences (all in ablation zone), and one with metastatic disease. Fourteen patients (18%) elected for surveillance, and the remaining underwent salvage ablation (n = 50), partial nephrectomy (n = 5), or radical nephrectomy (n = 8). Salvage ablation was successful in 38/50 (76%) patients, with 12 failures managed by observation (3), tertiary ablation (6), and radical nephrectomy (3). At a median follow-up of 28 months, the actuarial cancer-specific survival and overall survival in this select cohort of patients was 94.8 and 89.6%, respectively.

Except where otherwise noted, this item's license is described as Copyright © Loloi J et al. License: This open access article is licensed under Creative Commons Attribution 4.0 International (CC BY 4.0).