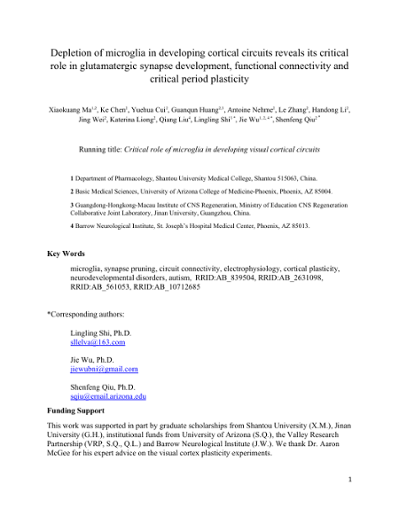 Microglia populate the early developing brain and mediate pruning of the central synapses. Yet, little is known on their functional significance in shaping the developing cortical circuits. We hypothesize that the developing cortical circuits require microglia for proper circuit maturation and connectivity, and as such, ablation of microglia during the cortical critical period may result in a long-lasting circuit abnormality. We administered PLX3397, a colony-stimulating factor 1 receptor inhibitor, to mice starting at postnatal day 14 and through P28, which depletes >75% of microglia in the visual cortex (VC). This treatment largely covers the critical period (P19-32) of VC maturation and plasticity. Patch clamp recording in VC layer 2/3 (L2/3) and L5 neurons revealed increased mEPSC frequency and reduced amplitude, and decreased AMPA/NMDA current ratio, indicative of altered synapse maturation. Increased spine density was observed in these neurons, potentially reflecting impaired synapse pruning. In addition, VC intracortical circuit functional connectivity, assessed by laser scanning photostimulation combined with glutamate uncaging, was dramatically altered. Using two photon longitudinal dendritic spine imaging, we confirmed that spine elimination/pruning was diminished during VC critical period when microglia were depleted. Reduced spine pruning thus may account for increased spine density and disrupted connectivity of VC circuits. Lastly, using single-unit recording combined with monocular deprivation, we found that ocular dominance plasticity in the VC was obliterated during the critical period as a result of microglia depletion. These data establish a critical role of microglia in developmental cortical synapse pruning, maturation, functional connectivity, and critical period plasticity.