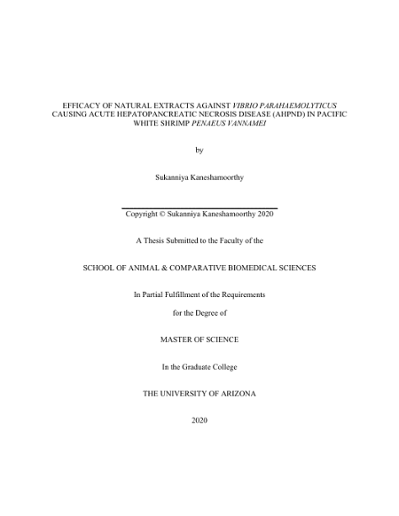 Over the past decade, shrimp industry has experienced billions of dollars of losses due to Acute Hepatopancreatic Necrosis Disease (AHPND), and AHPND is now posing a threat to the sustainability of shrimp industry worldwide. The disease is caused by Vibrio spp which carries a plasmid containing two toxin genes, PirA and PirB. Although AHPND is a bacterial disease, antibiotic-based therapy is not feasible due to the potential for development and dissemination of antimicrobial resistance, environmental issues, and rejection of consignment of commodity shrimp by many importing countries in Europe and North America for antibiotic residues. This study aimed to evaluate plant-derived extracts as potential therapeutics in controlling AHPND. The overall goal of the project is to enhance shrimp production through control of AHPND by delivering natural extracts (NEs) via feeds. The antibacterial activities of twenty-three NEs (NE01-NE023) were initially screened against Vibrio parahaemolyticus causing AHPND using a paper disk diffusion assay. Five (NE01 to NE05) out of 23 extracts showing anti-AHPND activity comparable to a commercial antibiotic, Doxycycline Hyclate were taken for further screening. Minimal inhibitory concentration (MIC) assay showed that NE01, NE02, NE03, NE04, and NE05 were effective at 0.15%, 0.15%, 0.075%, 0.04%, and 0.02% concentrations (expressed as v/v%), respectively. Subsequently NMR spectroscopic analyses were performed to determine the purity of these five extracts. While NE05 showed 100% purity, other NEs were found to have varying levels of impurities. Scanning electron micrographs of V. parahaemolyticus cells treated with sub-inhibitory concentration of five candidate natural extracts, NE01 to NE05 revealed that all five NEs arrested cell growth and displayed clumping of cells. In addition, cells treated with extracts NE03, NE04 and NE05 showed leaking of cell content. This suggests all five NEs have anti-bacterial properties. The natural extract, NE05 that showed the highest inhibition against V. parahaemolyticus in in vitro assays and had the highest level of purity was subsequently taken to evaluate the efficacy in controlling AHPND in in vivo experimental challenge using Specific Pathogen Free (SPF) Penaeus vannamei shrimp. Following an immersion challenge, the survival was found to be significantly higher in shrimp fed with a commercial diet containing NE05 at a 20% incorporation level (93% survival) compared to shrimp fed with the same diet containing 10% of NE05 (15% survival) or the commercial diet alone (3% survival). Shrimp raised on diet containing 20% NE05 neither displayed any clinical signs nor they developed any histopathological lesions in hepatopancreas that are hallmarks of AHPND infection. However, the animals raised on a diet containing 10% NE05 or a commercial diet developed clinical signs upon AHPND challenge and showed pathognomonic lesions of AHPND infection in hepatopancreas tissue. The data showed that NEs such as NE05 could be used as a potential therapeutic at 20% incorporation level in diets for controlling AHPND in shrimp. The feasibility of administering NE05 through oral route opens an opportunity for developing a NE-based therapy against AHPND.