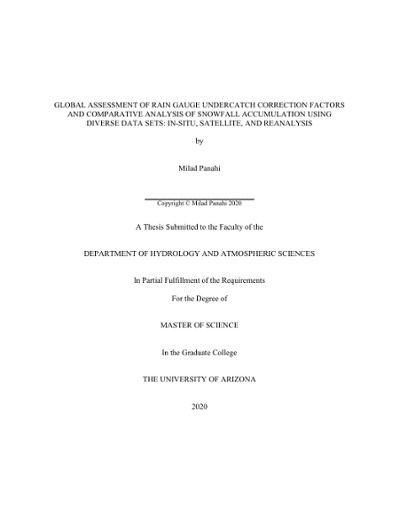 Despite its importance for hydrology and water resources, accurate estimation of snowfall rate over snow-covered regions has remained a major observational challenge from both in-situ and remote sensing instruments. Snowfall accumulation can be measured by either accumulating snowfall estimates or measuring snowpack properties such as Snow Water Equivalent (SWE) and mass. By focusing on snowfall over snow accumulation period and using case studies and long-term average (2003 to 2015) over CONUS, the first phase of our study compares snowfall accumulation from gauge stations (using GPCC and PRISM products), satellite products (GPCP and the suite of IMERG products), and reanalysis (ERA-interim, ERA5, and MERRA-2). Changes in SWE, based on the recent UA-SWE product and mass change observations from the Gravity Recovery and Climate Experiment (GRACE), were used for assessment of precipitation products for snowfall estimation. In the second phase of our study we assess two popular rain gauge undercatch correction factors (CFs) used in the Global Precipitation Climatology Centre (GPCC) monitoring and the Global Precipitation Climatology Project (GPCP) products, and quantify how much the choice of the CFs can impact our total estimate of precipitation over land at seasonal, annual, regional, and global scales. Rain gauges are critical for measuring precipitation rates at regional and global scales and are often used to calibrate precipitation rates estimated from other instruments such as satellites. However, precipitation measured at rain gauges are affected by gauge undercatch that is often larger for snowfall than rainfall. The main results include: (1) Based on UA-SWE and GRACE analysis over cold regions in the CONUS: Snow accumulation from most of the products is bounded by GPCC with and without correction, highlighting the critical importance of selecting proper CFs for gaugeundercatch correction. The CF based on Legates and Willmott method used in GPCP was found to be more consistent with the SWE-based analysis than CF based on the Fuchs method. Reanalysis products show very similar spatial pattern among themselves, but represent a large variation in simulating snow accumulation, with ERA-interim showing the least accumulation and MERRA-2 showing the highest accumulation and closest to the snow accumulation suggested by SWE. (2) Based on Global rain gauge analysis: Overall CFs are largest in higher latitudes and in winter when snowfall is dominant. The CFs are also compared with respect to the environmental variables used in their development, among those are near surface air temperature, relative humidity, and wind speed. Results show that the correction factors can increase the annual precipitation rate based on rain gauges by about 8%, although this amount can vary from about 3% (in boreal summer) to 10% (in boreal winter), depending on the season and the method used for gauge undercatch correction. It was also found that annual variations in CFs can be large, so the use of climatology CFs, like the one used in GPCP, requires caution.