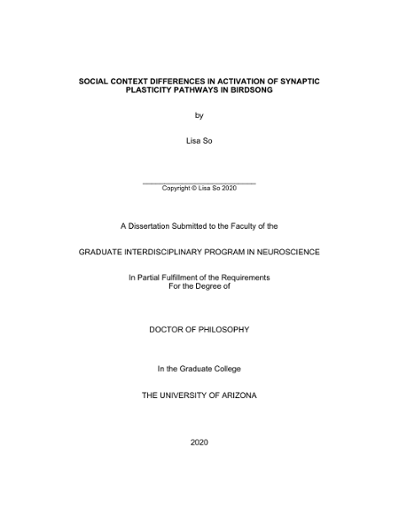 Vocal communication is critical for survival and is used by humans and animals for many reasons including socialization, and the inability to communicate is detrimental to one’s life. The neural mechanisms underlying vocal communication are poorly understood leading to poor therapeutic options when a dysfunction arises. In humans, Kuhl hypothesized that social interactions enhance the ability to learn speech and language (Kuhl, 2007). The circuitry that encodes for social behavior may gate the acquisition of speech making it important to understand social behaviors and the underlying mechanisms. Songbirds have been used as a model system to gain insight into the central brain mechanisms of vocal communication, particularly the study of behavior in different social contexts. In chapter two, I focused on the role of dopamine (DA) in social context-dependent differences in song. DA is an important neuromodulator of motor control across species. In zebra finches, DA levels vary in song nucleus Area X depending upon social context. DA levels are high and song output is less variable when a male finch sings to a female (female directed, FD) compared to when he is singing by himself (undirected, UD). DA modulates glutamatergic input onto cortico-striatal synapses in Area X via N-methyl-D-aspartate (NMDA) and DA receptor mechanisms, but the relationship to UD vs. FD song output is unclear. I investigated the expression of molecular markers of dopaminergic and glutamatergic synaptic transmission (tyrosine hydroxylase – TH, alpha-synuclein – α-syn) and plasticity (NMDAR2B – GRIN2B) following singing (UD vs. FD) and non-singing states to understand the molecular mechanisms driving differences in song output. With higher UD song amount, there were increases in TH, α-syn, and NMDAR2B protein levels. By contrast, the amount of FD song did not have a relationship with TH and NMDAR2B expression. Levels of α-syn showed differential expression patterns based on UD vs. FD song, consistent with its role in modulating synaptic transmission. I proposed a molecular pathway model to explain how social context and amount of song are important factors for molecular changes required for synaptic transmission and plasticity. In chapter three, I honed in on synaptic plasticity molecular pathways as mediators of social context differences in song output. Based on chapter two results, NMDARs were strong targets suggesting the role of synaptic plasticity in social context differences. In addition, a secondary synaptic plasticity pathway involving brain-derived neurotrophic factor (BDNF) and tropomyosin receptor kinase B (TrkB) was chosen since a rise in BDNF levels in a cortical song nucleus increased song learning. Therefore, I identified four molecules downstream of NMDAR and TrkB activation and determined their expression in Area X after UD and FD song: calcium/calmodulin dependent protein kinase II beta (CaMKIIB), homer scaffold protein 1 (HOMER1), serine/threonine protein kinase (Akt), and mechanistic target of rapamycin kinase (mTOR). My hypothesis was that all four protein levels would increase with more UD song in line with the more variable UD song and decrease with more FD song. My findings show that strong relationships between social context-dependent singing and protein levels for these key molecules do occur although not all results are in line with my hypothesis. As predicted, HOMER1 protein levels increased with the amount of UD song but decreased with the amount of FD song. Protein levels of mTOR decreased with the amount of FD song but showed no change with UD singing, the latter finding contradicting my hypothesis that mTOR levels would increase with UD singing. CaMKIIB protein levels fluctuated depending on the time spent singing UD song, and Akt protein levels trended downward with more time spent singing UD song. Both molecules showed no change with FD song. Therefore, my results support involvement of the synaptic plasticity pathways, but it may not be as straightforward as up and down regulation but suggests more complexity. In chapter four, I probe at the significance of the results from chapters two and three as well as address potential future directions based on my findings.