Pinto Beans and Prehistoric Pots: The Legacy of Al and Alice Lancaster [No. 183] 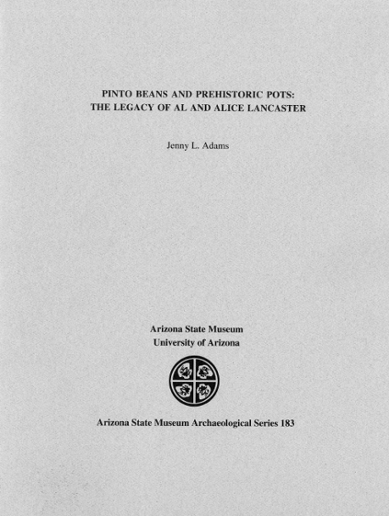 Preface (Watson Smith, Tucson, Arizona, 1988) The westering of America - a story told a thousand times - is old but ever new - in terms as varied as were the many individuals who have played their roles in a vast and mostly anonymous company. Most of them followed ill-marked paths toward the sunset, unwittingly becoming the stuff of a hallowed modem legend that ranges from suffering, horror, degradation, and failure to the romanticized grandeur of heroism, self-sacrifice, and fortune finally realized in the golden glow of hope fulfilled. That there were such westering pioneers at either extremity of that vast spectrum of human movement across North America is certain. But for most of them their way lay somewhere between the extremes, and for those few whose names are remembered, there were millions of ordinary folk who, though they passed unrecorded, have given genuine substance to what otherwise might be only the folk-legend of a restless people. Some where near the middle of the middle are Al and Alice Lancaster, whose story partakes of many of the commonplaces of their fellow wanderers, and whose record in many ways can be a paradigm for that of countless others. But the hearty particulars of their own lives, both beginning in the east and moving by very different routes to Colorado where they met and married, are remarkable. The satisfactions implicit in this evolution and its fulfillment are uncommon - for the very simple reason that Al and Alice are uncommon people. Their story, in itself is neither fabulous nor mythically heroic - it is as real and as human as are those of most of their fellows. And it is worthy of the telling for that very reason. There are some special considerations, though: Alice's pursuit of education, both for herself and for those she guided as a rural school-teacher and as the mother of six children, speaks for a greatness of spirit that is possessed by few people. And Al's insight and empathy with the archaeological past and its people have made him one of the most productive and honored dirt-archaeologists of the Southwest. But their story does not tell itself; it is revealed through the eyes of an author with a deep understanding of her subject. This author is advantaged in her telling by her genuine emotional rapport with Al and Alice, who have given of themselves because they have seen her as one who could have shared their Odyssey, if she had ever had the chance to do so, and who can certainly feel its pulse in her own heartbeat. A glorious story told without embellishment, it would probably not have inspired the reverence of Whitman in his paean Pioneers! 0 Pioneers! or Foss's melodramatic call for men to match his mountains. But it is as heartwarming as those impassioned poets could have made it. And I should know, because of my own privileged involvements in it for more than fifty years. The author gains, too, from a shared love of the Southwest, engendered by her experience within it and by her unusual emotional kinship with its spirit and its soul. One who reads this book will be rewarded not by just another tale of breaking sod, or homesteading, or following the sweating oxen in a dusty wagon-train (and Al and Alice did these things [except for the oxen]), nor even by the momentary thrill of riding the gossamer trestles that Otto Mears flung across the gorges of the San Juan Mountains, where there is, indeed, a touch of Katharine Lee Bates' "purple mountain majesty." Instead, it is the sharing of a rare kinship with people whose lives might have been ordinary, but for the miracle that they were lived by extraordinary people, and have been chronicled by a sympathetic and qualified recorder.