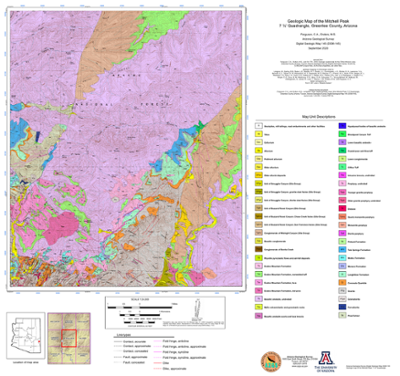 The Clifton-Morenci map area includes four 7.5’ USGS quadrangles: Coronado Mountain, Copperplate Gulch, Clifton, and Mitchell Peak. Descriptions of the Precambrian, Paleozoic, and Mesozoic rocks are primarily from Lindgren (1905a,b). The early Tertiary (Laramide) intrusive rock units are also described in detail by Bennett (1975), Menzer (1980), Preece and Menzer (1992), Griffin, Ring and Lowery (1993), Walker (1995), Phelps Dodge (1996), and Wright (1997). Hydrothermal alteration of the rocks of the Morenci porphyry copper deposit is well described in Lindgren (1905a), Reber (1916), Bennett (1974), Preece, Stegen and Weiskopf (1993), and Walker (1995). Descriptions of the Tertiary volcanic and sedimentary rocks are primarily derived from recent mapping by Ferguson and Enders (this report). Many of the unit names were derived from work in adjacent areas by Richter et al. (1983), Houser et al. (1985), Ratté and Brooks (1995), and Schroeder (1996). Geologic map units range in age from Holocene to Proterozoic.