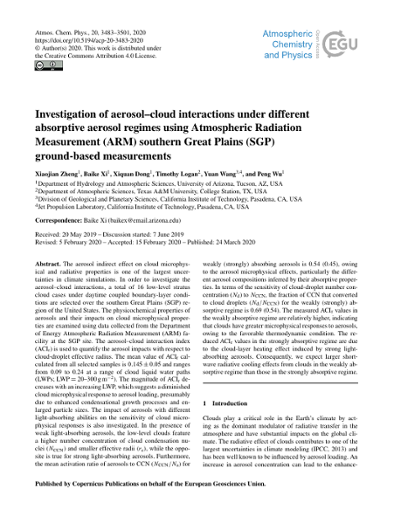 Copyright © Author(s) 2020. This work is distributed under the Creative Commons Attribution 4.0 License.

The aerosol indirect effect on cloud microphysical and radiative properties is one of the largest uncertainties in climate simulations. In order to investigate the aerosol-cloud interactions, a total of 16 low-level stratus cloud cases under daytime coupled boundary-layer conditions are selected over the southern Great Plains (SGP) region of the United States. The physicochemical properties of aerosols and their impacts on cloud microphysical properties are examined using data collected from the Department of Energy Atmospheric Radiation Measurement (ARM) facility at the SGP site. The aerosol-cloud interaction index (ACI(r)) is used to quantify the aerosol impacts with respect to cloud-droplet effective radius. The mean value of ACI(r) calculated from all selected samples is 0.145 +/- 0.05 and ranges from 0.09 to 0.24 at a range of cloud liquid water paths (LWPs; LWP = 20-300 g m(-2)). The magnitude of ACI(r) decreases with an increasing LWP, which suggests a diminished cloud microphysical response to aerosol loading, presumably due to enhanced condensational growth processes and enlarged particle sizes. The impact of aerosols with different light-absorbing abilities on the sensitivity of cloud microphysical responses is also investigated. In the presence of weak light-absorbing aerosols, the low-level clouds feature a higher number concentration of cloud condensation nuclei (N-CCN) and smaller effective radii (r(e)), while the opposite is true for strong light-absorbing aerosols. Furthermore, the mean activation ratio of aerosols to CCN (N-CCN/N-a) for weakly (strongly) absorbing aerosols is 0.54 (0.45), owing to the aerosol microphysical effects, particularly the different aerosol compositions inferred by their absorptive properties. In terms of the sensitivity of cloud-droplet number concentration (N-d) to N-CCN, the fraction of CCN that converted to cloud droplets (N-d/N-CCN) for the weakly (strongly) absorptive regime is 0.69 (0.54). The measured ACI(r) values in the weakly absorptive regime are relatively higher, indicating that clouds have greater microphysical responses to aerosols, owing to the favorable thermodynamic condition. The reduced ACI(r) values in the strongly absorptive regime are due to the cloud-layer heating effect induced by strong light-absorbing aerosols. Consequently, we expect larger shortwave radiative cooling effects from clouds in the weakly absorptive regime than those in the strongly absorptive regime.

Except where otherwise noted, this item's license is described as Copyright © Author(s) 2020. This work is distributed under the Creative Commons Attribution 4.0 License.