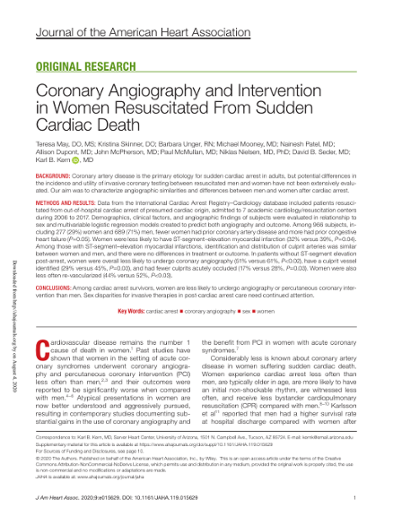 JOURNAL OF THE AMERICAN HEART ASSOCIATION

Copyright © 2020 The Authors. Published on behalf of the American Heart Association, Inc., by Wiley. This is an open access article under the terms of the Creative Commons Attribution-NonCommercial-NoDerivs License.

BACKGROUND: Coronary artery disease is the primary etiology for sudden cardiac arrest in adults, but potential differences in the incidence and utility of invasive coronary testing between resuscitated men and women have not been extensively evaluated. Our aim was to characterize angiographic similarities and differences between men and women after cardiac arrest. METHODS AND RESULTS: Data from the International Cardiac Arrest Registry-Cardiology database included patients resuscitated from out--of--hospital cardiac arrest of presumed cardiac origin, admitted to 7 academic cardiology/resuscitation centers during 2006 to 2017. Demographics, clinical factors, and angiographic findings of subjects were evaluated in relationship to sex and multivariable logistic regression models created to predict both angiography and outcome. Among 966 subjects, including 277 (29%) women and 689 (71%) men, fewer women had prior coronary artery disease and more had prior congestive heart failure (P=0.05). Women were less likely to have ST--segment-elevation myocardial infarction (32% versus 39%, P=0.04). Among those with ST--segment-elevation myocardial infarctions, identification and distribution of culprit arteries was similar between women and men, and there were no differences in treatment or outcome. In patients without ST--segment elevation post--arrest, women were overall less likely to undergo coronary angiography (51% versus 61%, P<0.02), have a culprit vessel identified (29% versus 45%, P= 0.03), and had fewer culprits acutely occluded (17% versus 28%, P= 0.03). Women were also less often re--vascularized (44% versus 52%, P<0.03). CONCLUSIONS: Among cardiac arrest survivors, women are less likely to undergo angiography or percutaneous coronary intervention than men. Sex disparities for invasive therapies in post--cardiac arrest care need continued attention.

Except where otherwise noted, this item's license is described as Copyright © 2020 The Authors. Published on behalf of the American Heart Association, Inc., by Wiley. This is an open access article under the terms of the Creative Commons Attribution-NonCommercial-NoDerivs License.