An Archaeological Assessment of the Middle Santa Cruz River Basin, Rillito to Green Valley, Arizona, for the Proposed Tucson Aqueduct Phase B, Central Arizona Project [No. 164] 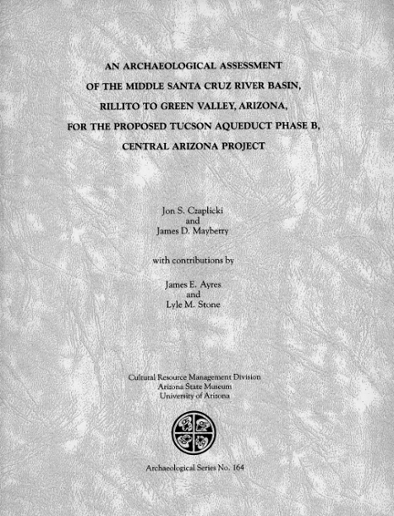 This report presents the results of an intensive archaeological assessment of Phase B of the Tucson Division, Central Arizona Project. Because of the relatively large amount of survey data available for the Phase B area, the Bureau of Reclamation and the Arizona State Museum decided that in lieu of the additional field investigations usually expected at the class 2 level survey, an in-depth review and assessment of existing data in terms of Phase B alternatives would be more appropriate. The survey data were used to discuss the Paleo-Indian, Archaic, Hohokam, Protohistoric, and Historic periods in the Phase B area. Settlement patterning and subsistence strategies for these periods were studied, as were various models for prehistoric cultural development in the area. Against this background, the three proposed canal-pipeline alternatives and the two reservoir and two sump site alternatives were assessed in terms of their impacts on known and expected cultural resources. Routes B-1 and B-2, the Twin Hills Reservoir, and the Bopp Road sump site were determined to be the best choices because they would have fewer impacts on the cultural resource base. Finally, to help determine a research orientation for future Phase B cultural resource studies, various research problems were discussed for each of the above-mentioned periods.