The Prehistoric Occupation of Voigt Mesa, Arizona: The 1983 TEP Springerville Project [No. 166] 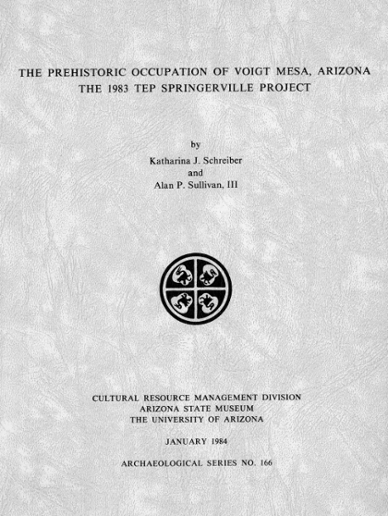 The 1983 TEP Springerville Project was conducted by the Cultural Resources Managment Division of the Arizona State Museum under contract to the Tucson Electric Power Company. The project was designed to mitigate the effects of the planned expansion of the fly ash disposal area along the south edge of Voigt Mesa, three miles west of the TEP Springerville Generating Station. The project area was and remains under the ownership of the State of Arizona. Archaeological investigations on this land were carried out under Arizona State Museum Permit Number 83-25. Preliminary survey of the project area by John Wilson (1983) located three sites requiring intensive study: two ceramic period rock shelters along the south margin of Voigt Mesa, and an Archaic period site on the mesa top. One additional Archaic period site was located on the mesa top during the course of the mitigation project. Because of the limited areal scope of the project, the research design for each site stressed its chronological placement, and the elucidation of intrasite variability reflecting activity areas, seasonality of occupation, and temporally and spatially discrete occupations. Analysis of the artifacts was aimed at describing variability in lithic reduction technology, and the temporal and cultural change reflected by this variability. The site on the mesa top yielded evidence for intermittent occupation during late Paleo-Indian times (Southern Cody complex, about 6600 to 6000 B.C.), possibly during the early Archaic period (Jay phase, about 5500 to 4800 B.C.), and during the late Archaic period (Armijo phase, about 1800 to 800 B.C.). Other sites on the mesa top exhibit similar evidence for intermittent occupation, although none was studied in detail during this mitigation project. The two rock shelters were occupied during late Basketmaker and Pueblo times, and correspond in date to a number of sites located during the Dead Valley archaeological project (Doyel and Debowski 1980).