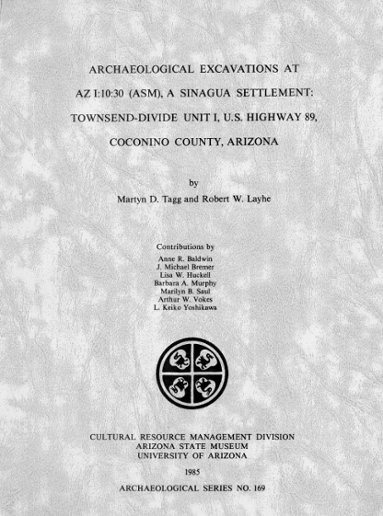 This report describes and discusses archaeological data recovery at a Sinagua site (AZ 1:10:30, ASM) within an Arizona Department of Transportation (ADOT) right-of-way near Flagstaff, Arizona. A brief discussion of the research potential of the site and of the cultural history and natural setting of the region is provided. This is followed by feature descriptions, artifact analyses and results, and interpretations of the subsistance patterns, chronology, and external relationships of the inhabitants of the site. Specialized analyses are provided in four appendixes at the end of the report. The investigations at Townsend-Divide (AZ 1:10:30, ASM), involving excavations on a small portion of a larger site, revealed two pit houses and four burials associated with the late Rio de Flag, Angell-Winona phases (A.D. 1000 to 1100). This work added useful information to our understanding of the Sinagua in the Flagstaff region in the Preeruptive-Posteruptive period, just after the formation of Sunset Crater in A.D. 1064 to 1066.