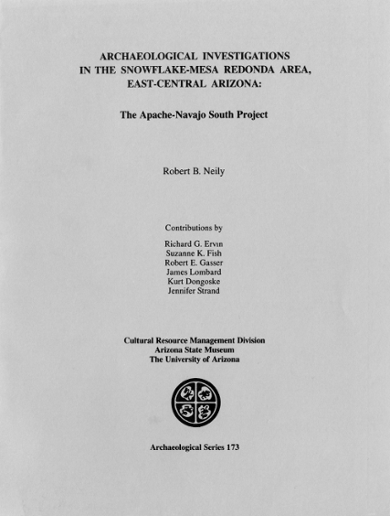 The Apache-Navajo South Project was conducted by the Cultural Resource Management Division (CRMD) of the Arizona State Museum under contract with the Bureau of Land Management (BLM). The project was designed to evaluate 20 parcels of public land comprising 10,369 acres in the southern part of Apache and Navajo counties, Arizona, that were being considered for possible disposal in conjunction with the Navajo-Hopi Land Exchange Program. An archaeological survey was conducted between August 27 and September 28, 1984, and 65 prehistoric sites, 3 historic sites, and a petroglyph site were recorded. A report was submitted to the BLM in January, 1985, documenting the results of this survey and outlining recommendations for the mitigation of impacts to these cultural resources. In June of 1985, a research design was submitted to the BLM for data recovery at five prehistoric sites dating between approximately A.D. 850 and 1250 and situated in four of the parcels designated for disposal. The emphasis of the research design was the documentation of prehistoric land use and subsistence patterns primarily in the upland regions of the Snowflake-Mesa Redonda area, where four of the sites were located. The fifth site, situated along a tributary wash of Millet Swale, was to provide a comparative data base on valley land-use patterns. The initial data recovery efforts at the five sites extended between July 22 and August 12 of 1985, with additional work being performed between September 10 and October 25, 1985. This report, in addition to summarizing the results of the 1984 survey, presents the results of the data recovery efforts at the five sites and a synthesis of the project. (excerpted from Preface)