Yield and feeding of prairie grasses in east-central Alberta 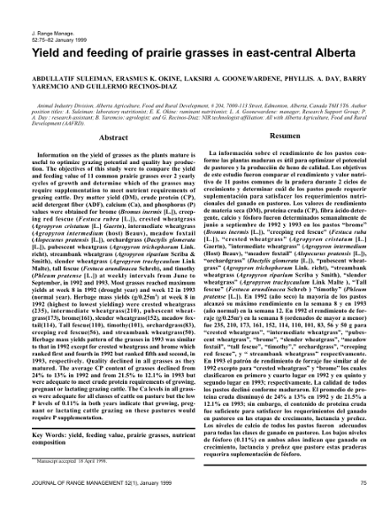 Information on the yield of grasses as the plants mature is useful to optimize grazing potential and quality hay production. The objectives of this study were to compare the yield and feeding value of 11 common prairie grasses over 2 yearly cycles of growth and determine which of the grasses may require supplementation to meet nutrient requirements of grazing cattle. Dry matter yield (DM), crude protein (CP), acid detergent fiber (ADF), calcium (Ca), and phosphorus (P) values were obtained for brome (Bromus inermis [L.]), creeping red fescue (Festuca rubra [L.]), crested wheatgrass (Agropyron cristatum [L.] Gaertn), intermediate wheatgrass (Agropyron intermedium (host) Beauv), meadow foxtail (Alopecurus pratensis [L.]), orchardgrass (Dactylis glomerata [L.]), pubescent wheatgrass (Agropyron trichophorum Link. richt), streambank wheatgrass (Agropyron riparium Scriba &Smith), slender wheatgrass (Agropyron trachycaulum Link Malte), tall fescue (Festuca arundinacea Schreb), and timothy (Phleum pratense [L.]) at weekly intervals from June to September, in 1992 and 1993. Most grasses reached maximum yields at week 8 in 1992 (drought year) and week 12 in 1993 (normal year). Herbage mass yields (g/0.25m2 at week 8 in 1992 (highest to lowest yielding) were crested wheatgrass (235), intermediate wheatgrass(210), pubescent wheatgrass(173), brome(161), slender wheatgrass(152), meadow foxtail(114), Tall fescue(110), timothy(101), orchardgrass(83), creeping red fescue(56), and streambank wheatgrass(50). Herbage mass yields pattern of the grasses in 1993 was similar to that in 1992 except for crested wheatgrass and brome which ranked first and fourth in 1992 but ranked fifth and second, in 1993, respectively. Quality declined in all grasses as they matured. The average CP content of grasses declined from 24% to 13% in 1992 and from 21.5% to 12.1% in 1993 but were adequate to meet crude protein requirements of growing, pregnant or lactating grazing cattle. The Ca levels in all grasses were adequate for all classes of cattle on pasture but the low P levels of 0.11% in both years indicate that growing, pregnant or lactating cattle grazing on these pastures would require P supplementation.