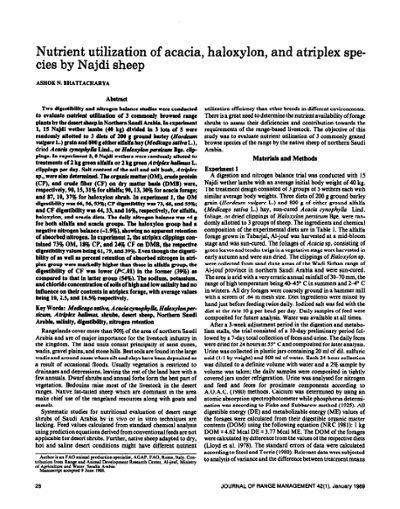 Two digestibility and nitrogen balance studies were conducted to evaluate nutrient utilization of 3 commonly browsed range plants by the desert sheep in Northern Saudi Arabia. In experiment 1, 15 Najdi wether lambs (40 kg) divided in 3 lots of 5 were randomly allotted to 3 diets of 200 g ground barley (Hordeum vulgare L.) grain and 800 g either alfalfa hay (Medicago sativa L.), dried Acacia cynophylla Lind., or Haloxylon persicum Bge. clippings. In experiment 2, 8 Najdi wethers were randomly alloted to treatments of 2 kg green alfalfa or 2 kg green Atriplex halimus L. clippings per day. Salt content of the soil and salt bush, Atriplex sp., were also determined. The organic matter (OM), crude protein (CP), and crude fiber (CF) on dry matter basis (DMB) were, respectively, 90, 15, 31% for alfalfa; 90, 13, 30% for acacia forage; and 87, 10, 37% for haloxylon shrub. In experiment 1, the OM digestibility was 66, 56, 53%; CP digestibility was 73, 68, and 55%; and CF digestibility was 44, 33, and 16%, respectively, for alfalfa, haloxylon, and acacia diets. The daily nitrogen balance was +4 g for both alfalfa and acacia groups. The haloxylon group had a negative nitrogen balance (-1.9%), showing no apparent retention of absorbed nitrogen. In experiment 2, the atriplex clippings contained 73% OM, 18% CP, and 24% CF on DMB, the respective digestibility values being 61, 79, and 39%. Even though the digestibility of as well as percent retention of absorbed nitrogen in atriplex group were markedly higher than those in alfalfa group, the digestibility of CF was lower (P<.01) in the former (39%) as compared to that in latter group (54%). The sodium, potassium, and chloride concentration of soils of high and low salinity had no influence on their contents in atriplex forage, with average values being 10, 2.5, and 16.5% respectively.