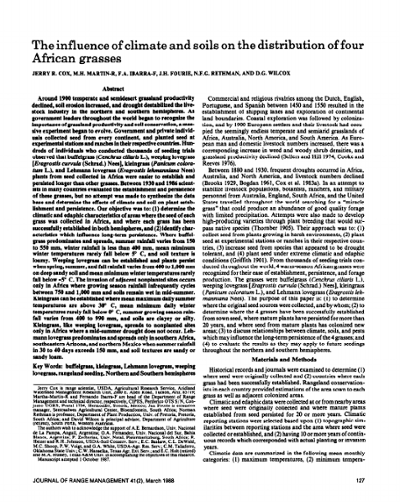 Around 1900 temperate and semidesert grassland productivity declined, soil erosion increased, and drought destabilized the livestock industry in the northern and southern hemispheres. As government leaders throughout the world began to recognize the importance of grassland productivity and soil conservation, a massive experiment began to evolve. Government and private individuals collected seed from every continent, and planted seed at experimental stations and ranches in their respective countries. Hundreds of individuals who conducted thousands of seeding trials observed that buffelgrass (Cenchrus ciliaris L.), weeping lovegrass [Eragrostis curvula (Schrad.) Nees], kleingrass (Panicum coloratum L.), and lovegrass (Eragrostis lehmanniana Nees) plants from seed collected in Africa were easier to establish and persisted longer than other grasses. Between 1930 and 1986 scientists in many countries evaluated the establishment and persistence of these grasses, but no attempt was made to synthesize the data base and determine the effects of climate and soil on plant establishment and persistence. Our objective was to: (1) determine the climatic and edaphic characteristics of areas where the seed of each grass was collected in Africa, and where each grass has been successfully established in both hemispheres, and (2) identify characteristics which influence long-term persistence. Where buffelgrass predominates and spreads, summer rainfall varies from 150 to 550 mm, winter rainfall is less than 400 mm, mean miminum winter temperatures rarely fall below 5 degrees C, and soil texture is loamy. Weeping lovegrass can be established and plants persist when spring, summer, and fall rainfall varies from 400 to 1,000 mm on deep sandy soil and mean minimum winter temperatures rarely fall below -5 degrees C. The invasion of adjacent nonplanted sites occurs only in Africa where growing season rainfall infrequently cycles between 750 and 1,000 mm and soils remain wet in mid-summer. Kleingrass can be established where mean maximum daily summer temperatures are above 30 degrees C, mean minimum daily winter temperatures rarely fall below 0 degrees C, summer growing season rainfall varies from 400 to 990 mm, and soils are clayey or silty. Kleingrass, like weeping lovegrass, spreads to nonplanted sites only in Africa where a mid-summer drought does not occur. Lehmann lovegrass predominates and spreads only in southern Africa, southeastern Arizona, and northern Mexico when summer rainfall in 30 to 40 days exceeds 150 mm, and soil textures are sandy or sandy loam.