Yield and Digestibility of Old World Bluestem Grasses as Affected by Cultivar, Plant Part, and Maturity 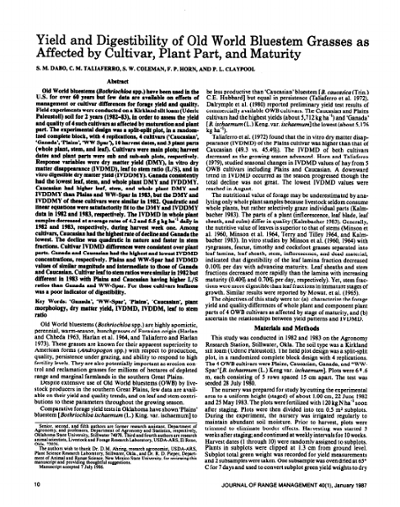 Old World bluestems (Bothriochloa spp.) have been used in the U.S. for over 60 years but few data are available on effects of management or cultivar differences for forage yield and quality. Field experiments were conducted on a Kirkland silt loam (Uderic Paleustoll) soil for 2 years (1982-83), in order to assess the yield and quality of 4 such cultivars as affected by maturation and plant part. The experimental design was a split-split plot, in a randomized complete block, with 4 replications, 4 cultivars ('Caucasian', 'Ganada', 'Plains', 'WW Spar'), 10 harvest dates, and 3 plant parts (whole plant, stem, and leaf). Cultivars were main plots; harvest dates and plant parts were sub and sub-sub plots, respectively. Response variables were dry matter yield (DMY), in vitro dry matter disappearance (IVDMD), leaf to stem ratio (L/S), and in vitro digestible dry matter yield (IVDDMY). Ganada consistently had the lowest leaf, stem, and whole plant DMY and IVDDMY. Caucasian had higher leaf, stem, and whole plant DMY and IVDDMY than Plains and WW-Spar in 1983, but the DMY and IVDDMY of these cultivars were similar in 1982. Quadratic and linear equations were satisfactorily fit to the DMY and IVDDMY data in 1982 and 1983, respectively. The IVDMD in whole plant samples decreased at average rates of 4.2 and $5.5 g kg ha-1 daily in 1982 and 1983, respectively, during harvest week one. Among cultivars, Caucasian had the highest rate of decline and Ganada the lowest. The decline was quadratic in nature and faster in stem fractions. Cultivar IVDMD differences were consistent over plant parts. Ganada and Caucasian had the highest and lowest IVDMD concentrations, respectively. Plains and WW-Spar had IVDMD values of similar magnitude and intermediate to those of Ganada and Caucasian. Cultivar leaf to stem ratios were similar in 1982 but different in 1983 with Plains and Caucasian having higher L/S ratios than Ganada and WW-Spar. For these cultivars leafiness was a poor indicator of digestibility.